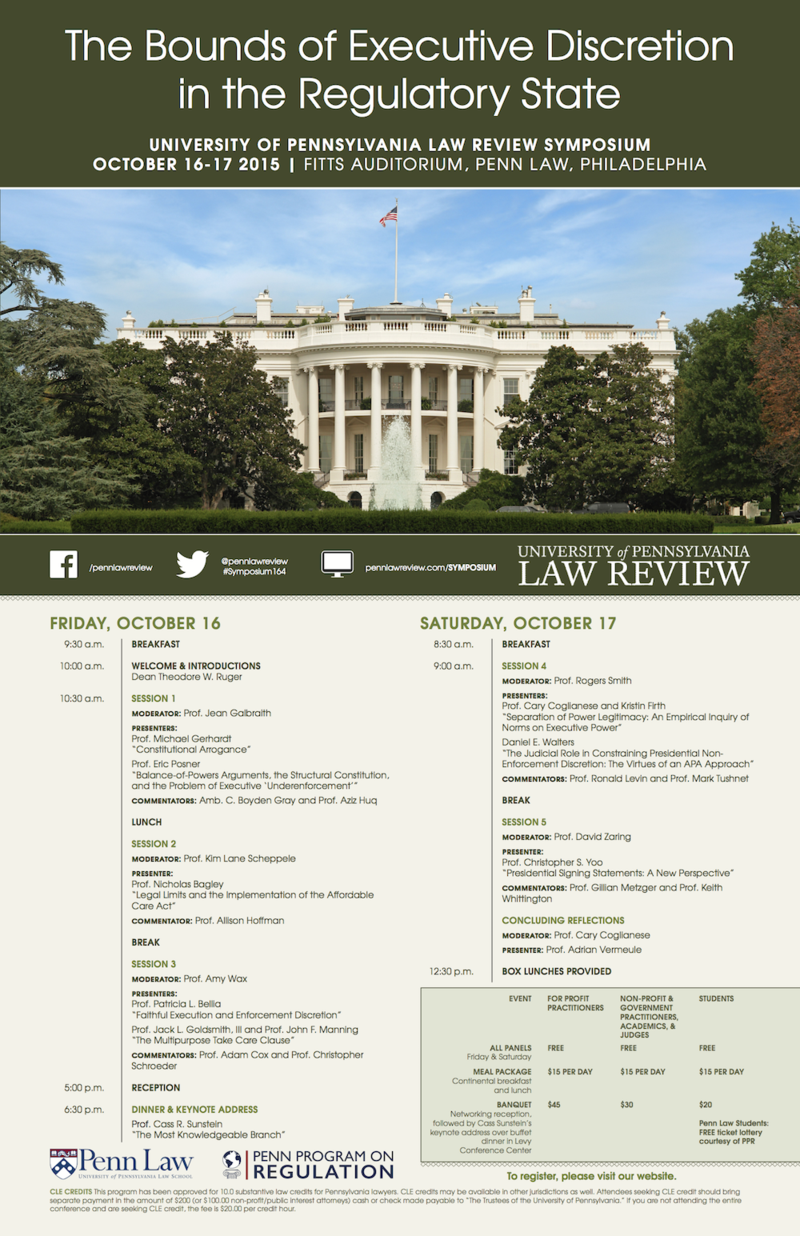 Not since Youngstown Sheet & Tube Co. v. Sawyer have the legal limits of presidential authority occupied public discourse and judicial attention to the degree they do at the present time. The unitary executive theory put forward by the George W. Bush Administration reignited debate over presidential power among academic commentators, and recent disputes over President Barack Obama's use of executive discretion have reached a political fever pitch, now occupying the courts like at no time in sixty years.

Litigation currently includes a House of Representatives lawsuit over the Obama Administration's unilateral extension of statutory deadlines in the Affordable Care Act. (Private litigants filed an action in the 11th Circuit over this same issue, but were unable to satisfy standing.) Litigation has also arisen over the administration's immigration reforms, which have already been drawn into question by federal court decisions in Pennsylvania and Texas. In addition to litigation over the Federal Communications Commission's recent “net neutrality” order, congressional committees are investigating whether President Obama improperly interfered with decisionmaking at that independent agency.

Unlike with the Steel Seizure case, where President Truman affirmatively ordered federal control over private property, many of today's legal controversies over presidential power in domestic affairs increasingly arise not just from straightforward assertions of brute presidential authority, but also from a more subtle, deft exercise of well‐accepted executive discretion. It can even be said that many of today's controversies revolve not so much around executive action, but rather around creative uses of inaction. It has been long accepted that, barring any express statutory constraints, the executive can constitutionally choose when to enforce the law and when to initiate adjudicatory and rulemaking proceedings. Legal limits on executive authority have, in the past, applied when the President decides to act, not before. Until then, the executive branch possesses “absolute discretion,” as the Supreme Court held in Heckler v. Chaney.

Yet today the absoluteness of that discretion is being put to the test. Over at least the last several administrations, Presidents and their cabinet officials have been finding creative ways to achieve substantive policy results by the exercise of, or influence over, what has previously been considered completely discretionary realms of governmental administration. The Obama Administration asserts that in extending the Affordable Care Act's deadlines and offering immigration relief, it is not doing anything other than using its well‐accepted discretion to reallocate enforcement priorities. Presidential signing statements – another major subject of recent controversy over executive authority – also involve claims of enforcement discretion, as does the refusal to defend the constitutionality of statutes. President Obama can even claim that he never once interfered with any actions undertaken by the FCC, for his public statements about net neutrality were made before any agency actions had been formally initiated, part of a discretionary agenda‐setting stage preceding regulatory action that was highlighted in Elena Kagan's Harvard Law Review article on the Clinton Administration.

Are there limits to the exercise of executive discretion over domestic matters, and if so, what are they? That is the motivating question behind the contemporary debate over presidential power, and it is the question around which the University of Pennsylvania Law Review will be organizing its 2015 symposium. Topics explored in this symposium will include the proper scope of executive orders, such as recent actions on immigration policy and climate change; de facto changes in law through non‐enforcement, such as the extension of Affordable Care Act deadlines and changes in immigration policies; refusal to defend the constitutionality of legislation, such as the Defense of Marriage Act; the growing use of presidential signing statements; and presidential influence over independent agencies. The keynote address will be delivered by Cass R. Sunstein, the Robert Walmsley University Professor at Harvard Law School.