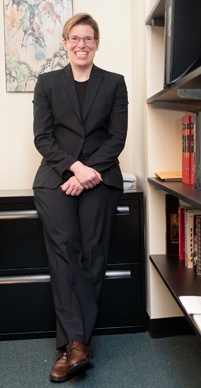 The Immigration Law Professors Blog plans to run a series of posts related to innovations and/or successes in immigration law teaching and/or lawyering.  Our first post features Professor Kari Hong, who teaches as Boston College Law School, and the Ninth Circuit Appellate Program that she founded and directs.  The Ninth Circuit Appellate Program represented the petitioner in Lopez-Valencia v. Lynch, 798 F.3d 863 (9th Cir. 2015), an important crimmigration case in which the Ninth Circuit found that a California theft conviction (including any offense for which the underlying substantive offense charged was a violation of California Penal Code § 484), is both not a categorical theft offense and not subject to the modified categorical approach.

1. What is the Ninth Circuit Appellate Program?

The Ninth Circuit Appellate Program (NCAP) is a clinic that is part of a Ninth Circuit program designed to encourage pro bono representation of pro se petitioners before the Court.  The Ninth Circuit has been running this program for about 30 years and has been incredible in permitting supervised law students to have an opportunity to practice before it, for instance by setting briefing schedules that permit the law students to argue a case from start to finish by briefing it in the fall and arguing it in the spring. The cases all involve indigent individuals, and I select only immigration cases, preferably those with criminal convictions.

The way that I run the program is as a clinic.  I have 2 students work in a team on one case (and each year, I supervise 2 teams for a total of four students).  I keep the teams to two so that both can argue the case before the Court (one does direct, the other does rebuttal argument).

2.  What led you to develop this project?

I simply love everything about the Ninth Circuit.  Before law school, I was a paralegal for an immigration attorney and saw right away the indelible impact that Ninth Circuit practice had on immigration clients.  After law school, I was a clerk to Chief Judge Sidney Thomas, which was one of the most exciting and intellectually challenging years I had.

Before teaching, I had my own practice in Oregon and California which I specialized in Ninth Circuit cases (I also argued state criminal appeals).  I had represented just under 100 immigration and criminal cases to the Court.  When I decided to go into teaching, I wanted to be able to teach the appellate advocacy skills I had developed.  I knew about the Ninth Circuit’s clinical law school program.

3. How do you pick your cases?  And how do you select your students?

I look for exciting Imm Crim issues.  I look for difficult cases with dim prospects of success.  When I started practicing, a great attorney told me never be proud of a winning record, for that only means an attorney is cherry-picking the easy cases.  I took the advice to heart and impart to the students that our success comes from fighting the battle and letting the clients know they have someone working on their behalf.  I tell them that I would much rather go down in flames than rack up easy wins.

Although I designed the clinic in mind in hopes that students wanting to be immigration attorneys would learn federal court practice, I choose students who are excited and eager to learn. I have selected students who want to be immigration attorneys, want to be prosecutors or criminal defense counsel, have a general public interest background, are going to a corporate law firm, or are still figuring out what they want to do.

4. You had a wonderful victory recently in Lopez-Valencia v. Lynch.  Tell us a little about the role of the students in that case.

Thank you!  Kelly Schwartz (BCLS '15) and Jeremy Sanders (BCLS '15) did an amazing job with that case.  Truly amazing.  I teach an Immigration Consequences of Criminal Convictions course, which Jeremy had taken the year earlier.  Jeremy is the one who identified the indivisibility argument.  Not only did I not see it, but when the students came to me with their preliminary legal issue list, I told them the argument was DOA (Dead on Arrival; the case came to us with a novel sentencing issue, which at the end, dropped out from consideration).  Thank goodness Jeremy was persistent, and it turns out, absolutely 100% correct in applying Descamps to the California theft statute!

What I love about this experience is that the students start the year as students and end it as co-counsel.  I encourage them to invest early and start questioning my advice, wisdom, and direction.  I keep reminding them that they are the ones who have to explain the theory to the judges so they need to be behind it completely.