From the Bookshelves: The Economics of Immigration Market-Based Approaches, Social Science, and Public Policy by Benjamin W. Powell 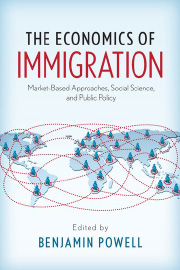 Few topics in current affairs are as contentious as immigration. Yet despite the controversies, social scientists who study immigration largely agree about its effects, whatever differences they may have about how a nation should change its policies. Their findings, however, have been buried in academic journals accessible only to other scholars—until now.

With the publication of The Economics of Immigration: Market-Based Approaches, Social Science, and Public Policy, edited by Benjamin Powell, readers can now easily access the substance of the vast scholarly literature about a subject that touches millions of lives.

Combining rigor and readability, The Economics of Immigration offers important findings and bold ideas that will appeal to a variety of readers. General readers who absorb its lessons will be well equipped to dispel widespread myths about the effects of immigration. Policymakers and pundits will be struck by its non-partisan tone, and its clear-headed proposals capable of bridging the political divide. And scholars will appreciate the book’s reviews of numerous studies, all in one volume.

Part I summarizes and evaluates the literature on immigration and wages, employment, economic growth, government spending and revenues, cultural and civic assimilation, and work visas, with each chapter assessing the strengths and weaknesses of various studies, highlighting the best scholarship currently available, and discerning the overall scholarly consensus on each topic.

Part II features policy recommendations. These include a “market-based” approach designed to improve efficiency, fairness, and economic growth; a “pro-assimilation” approach that would reduce immigration but legalize immigrants who are in the United States illegally; and a “radical” case for an open borders, which draws on moral principles of various philosophical traditions as well as empirical research. The book concludes with the editor’s assessments of proposals put forth by six influential scholars.