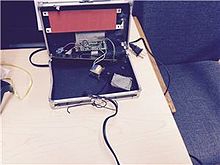 The Clock, Photo courtesy of Wikipedia

Breaking News:  After meeting President Obama last night, Ahmed Mohamed and his family announced their plan to leave the United States. Schools from across the country have made offers to Ahmed since he was arrested at Irving’s MacArthur High last month—his homemade clock confused with a hoax bomb, transforming him into a symbol of perceived anti-Muslim bias. An offer from the Middle East attracted the family. The Mohameds announced  that they’ve accepted a foundation’s offer to pay for the 14-year-old’s high school and college in Doha, Qatar, which Ahmed visited a few weeks on a world tour.