Last year, the anti-immigrant Pegida movement took off in Dresden, and it celebrated the fact on Monday with a rally they claimed thousands attended.

Alison Smale in the New York Times reports on a deeply troubling development in Germany, which still is dealing with the challenges of a much-publicized refugee flow from Syria.

The stabbing of a politician overseeing refugee affairs in Cologne and a veiled call to reopen concentration camps at an anti-immigration rally of 20,000 people have set off new fears that anti-immigrant sentiment is taking a sharper turn in Germany, even as pressure mounts on Chancellor Angela Merkel’s government over its handling of Europe’s migrant crisis.

The violence has spurred a new debate about whether hate speech, which in Germany is routinely subject to investigation and prosecution when spoken or printed, should be removed from social media.

On Wednesday, the head of Germany’s Central Council of Jews, Josef Schuster, noted that “the incitement against refugees has reached a level which is absolutely horrifying and completely unacceptable.” 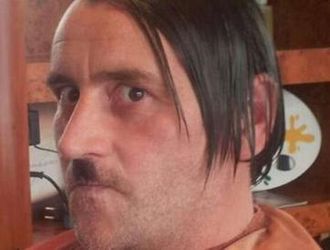 PEGIDA's founder and leader Lutz Bachmann dressed as Adolf Hitler, which he says was doctored