With Liberty and Justice for All: The State of Civil Rights at Immigration Detention Facilities 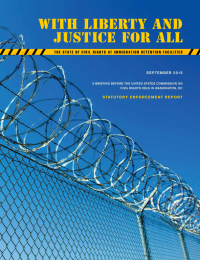 With Liberty and Justice for All: The State of Civil Rights at Immigration Detention Facilities,  A Briefing before the United States Commission on Civil Rights held in Washington, DC - Statutory Enforcement Report, September 2015

This Statutory Enforcement Report examines the civil rights and constitutional concerns that the U.S. Commission on Civil Rights (Commission) “raised with the Department of Homeland Security (DHS) and its component [agencies] over the treatment of adult and minor [immigrant] detainees [who are being] held under federal law in detention centers across the country.” Specifically, this report analyzes the constitutional issues surrounding DHS’s treatment of detained immigrants as well as other selected federal agencies’ efforts to comply with established Performance Based National Detention Standards (PBNDS), the Prison Rape Elimination Act of 2003 (PREA), and the federal standards for detaining unaccompanied minor children

The report calls on the Obama administration to reverse course and stop detentions of women and children who entered the United States unlawfully but might qualify for asylum. The U.S. Commission on Civil Rights said it found evidence that the federal government "was interfering with the constitutional rights afforded to detained immigrants," including their access to legal representation."   For more details in the report, click here.