From the Bookshelves: A Nation of Nations: A Great American Immigration Story by Tom Gjelten 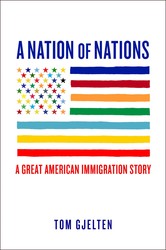 In A Nation of Nations: A Great American Immigration Story, veteran NPR correspondent Tom Gjelten assesses the impact and importance of the 1965 Immigration and Nationality Act by interweaving the stories of a handful of immigrant families with the history and analysis of the immigration changes in America as a whole.

As the 50th anniversary of the 1965 Act approaches this October, immigration continues to be a hot-button issue in American politics.  When the law was passed, fewer than 5 percent of Americans were foreign-born. Today, immigrants make up nearly 14 percent of the U.S. population, and the composition of the foreign-born population has changed dramatically. The 1965 Act abolished the national-origin quotas that favored immigrants from Europe and discriminated against all others. The United States, for the first time, became a country that officially welcomed people of all nationalities.

In the decades since, America’s founding myth of openness has been tested. Prior to 1965, three out of four immigrants came from Europe, and the country’s cultural character reflected its Anglo-Saxon roots. As Gjelten writes, “The evident premise of U.S. immigration law was that the explanation for America’s success in the world actually lay in its European heritage, not in its history as a country shaped by enterprising newcomers.” Fifty years after passage of the 1965 Act, nine out of ten immigrants are coming from other parts of the world, including Vietnam, Korea, India, Pakistan, Egypt, Mexico, Central America, Ethiopia, Nigeria, and many other places previously unrepresented. As one of the last—and most important—acts of the civil-rights era, the 1965 Act forced a new consideration of the U.S. national identity. By committing to a multicultural heritage, America took a thrilling gamble, betting heavily on its own resilience. As Gjelten writes in the prologue:

“The immigrant influx set up a belated test of America’s character and identity. Was its strength and resilience a result of its formation as ‘not merely a nation but a teeming nation of nations,’ as Walt Whitman said? Or were its achievements actually due to its Anglo-Saxon heritage? That aspect of American society was fast diminishing in relative importance, replaced by unprecedented racial and ethnic diversity. The country had not yet dared to see whether it could live up to its motto, E pluribus unum, ‘Out of many, one’ (an expression that referred originally to the thirteen colonies coming together as one state). As last, America could find out whether it was truly an exceptional nation and what it really meant to be American.”

This story unfolded with particular drama in some communities, notably one suburban county in northern Virginia that experienced a lifetime of change in a few short years, as immigrants arrived from all over the world. As late as 1970, foreign-born residents in Fairfax County made up less than one percent of the population. By 2010, one out of four county residents was an immigrant, and more than 100 languages were represented in the county school system.

Gjelten’s narrative portrays in rich detail five immigrant families fromAsian, Arab, and Latin American countriesas they settle into Fairfax County and struggle to find and embrace the values that bind them to their new homeland and make them fully American.

Mark Keam and Alex Seong Keam both came from impoverished backgrounds in South Korea but both took advantage of educational opportunities in the United States and became successful lawyers. Along the way, they observed the tensions that sometimes surface in the relations between immigrants and other minority groups. Mark was a political activist and, with his wife’s support, became the first Asian immigrant elected to the Virginia state legislature. His career demonstrated the political clout of the new immigrant population.

Esam Omeish and his siblings arrived in the United States with their parents from Libya. Though the family was not especially religious in Libya, they became devout Muslims in America. Esam, who became a prominent lay leader of the Muslim community in northern Virginia, credited a U.S. climate of openness and freedom and was determined to show that a commitment to Islam is not incompatible with a fervent U.S. patriotism.

The Alarcón family immigrated from Bolivia, spurred by the family matriarch who taught her daughters and their husbands to plan their futures carefully and plot a way to reach their destination. “When you start out poor, you are better than others at rising up,” she counseled. And rise up they did, learning new skills and trades with the help of instructional books they borrowed from their local library.

The families profiled in A Nation of Nations are illustrative of the immigration experience across America and their stories incorporate many immigrant themes, including friction between minorities, the drive to compete and create, and the burdens associated with racial and cultural stereotyping.

Among the characters in this epic story are the politicians and pundits who debated for years whom the country should welcome, the African American activists who overcame segregation only to face competition from new immigrant neighbors, and the government officials who had to design services for a population of various languages, faiths, and colors.

Gjelten shares many notable insights on the 1965 Immigration and Naturalization Act, including:

The 1965 Immigration and Naturalization Act has received far less attention than the Civil Rights Act or the Voting Rights Act, which were approved around the same time, but its passage has proved to be one of the most nation-changing events in American history.  By eliminating national origin quotas, which heavily favored European immigration, the 1965 Act opened the door to visa applicants from around the world on a non-discriminatory basis.  In the fifty years after its enactment, the foreign-born share of the U.S. population tripled and shifted dramatically in composition.