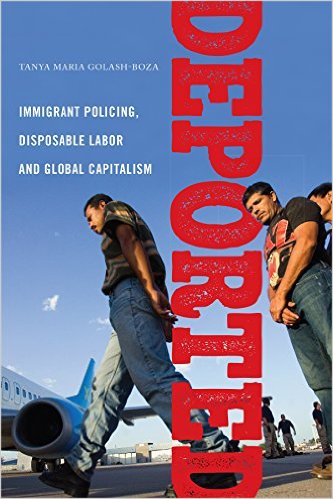 The United States currently is deporting more people than ever before: 4 million people have been deported since 1997 –twice as many as all people deported prior to 1996. There is a disturbing pattern in the population deported: 97% of deportees are sent to Latin America or the Caribbean, and 88% are men, many of whom were originally detained through the U.S. criminal justice system. Weaving together hard-hitting critique and moving first-person testimonials, Deported tells the intimate stories of people caught in an immigration law enforcement dragnet that serves the aims of global capitalism.

Tanya Golash-Boza uses the stories of 147 of these deportees to explore the racialized and gendered dimensions of mass deportation in the United States, showing how this crisis is embedded in economic restructuring, neoliberal reforms, and the disproportionate criminalization of black and Latino men. In the United States, outsourcing creates service sector jobs and more of a need for the unskilled jobs that attract immigrants looking for new opportunities, but it also leads to deindustrialization, decline in urban communities, and, consequently, heavy policing. Many immigrants are exposed to the same racial profiling and policing as native-born blacks and Latinos. Unlike the native-born, though, when immigrants enter the criminal justice system, deportation is often their only way out. Ultimately, Golash-Boza argues that deportation has become a state strategy of social control, both in the United States and in the many countries that receive deportees.