Vicky Yau: A Review of Undocumented by Dan-el Padilla Peralta 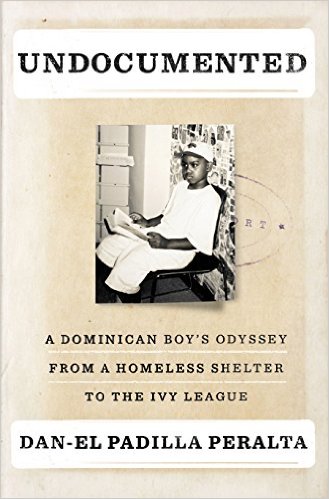 In Undocumented, Dan-el Padilla Peralta tells of his childhood and young adulthood in Undocumented, serves as a reminder of the perseverance and determination of immigrants, trying to attain the illusive “American Dream.” Through Padilla Peralta’s anecdotes, we (readers) are reminded of the many aspects of the American Dream. First, that its definition is entirely subjective. Second, that many immigrant parents seem to be a different breed of humans; they seem to have unbridled perseverance, courage, determination, selflessness, (and a whole slew of similar adjectives that I won’t list at the moment) in the pursuit of their American Dream. Which circles back to the idea that the definition of the American Dream is entirely subjective.

Dan-el Padilla Peralta arrived in New York City from the Dominican Republic with his father and mother on visitors’ visas. The difficulties of his mother’s pregnancy had forced the family to travel to the U.S. to seek advanced medical aid.  After successfully giving birth to his younger brother Yando. Dan-el’s mother, Maria decided she wanted to raise her two sons in America. She believed the American educational system and civil laws provided her sons with a safe and opportune environment to reach their intellectual potential. This was her American Dream, to provide her sons with their best chance at success.

In order to realize her American Dream, she decided to remain in the U.S, despite having to be a single mother (the boys’ father ultimately returned to the Dominican Republic), who’s visa, along with Dan-el’s had expired. The lack of legal status prevented her from securing employment, which brought financial difficulties. Through the years, she struggled to feed her growing son and provide a safe home. Padilla Peralta describes a series of nights when dinner merely consisted of rice and small pieces of chicken. And then he writes, “On one of those nights, I noticed that Mom wasn’t eating” (27). The family’s financial challenges also forced them to seek refuge with the city’s homeless shelter system. Padilla Peralta describes the filth of the environment, so unsafe that it plagued his family with illnesses, from tuberculosis to severe asthma. Despite all the aforementioned challenges (and many more not discussed here), Maria held on to her American Dream, to see her sons succeed academically in an environment safe from her political enemies in the Dominican Republic.

As for Dan-el, it can be argued his American Dream was to reach his fullest potential for life as a whole. I think he wanted to fulfill his academic potential as much for himself, as for his mother. And in the face of legal, financial, and societal adversity, Dan-el’s admissions into Prep-for-Prep (the prestigious NYC summer academic program for outstanding students), Collegiate, Princeton, Oxford, and Stanford certainly provided an example to the world that immigration, financial, and societal status can not, and should not be an excuse for not reaching one’s academic potential.   But, perhaps above all else, his story provides a glimpse into a rather veiled world of countless students and families in similar situations. He writes in the epilogue, that his conversations with undocumented students over the years have “reinforced [his] conviction that [the] community of DREAMers is uniquely talented, gifted, bursting with desire and ambition” (296). In telling his story, Padilla Peralta is telling the increasingly suspicious American public that this country’s unyieldingly stiff immigration policies not only inhibit these individuals from reaching their highest potential, but they are also preventing the infiltration of talents that can only improve America in so many ways.

Suffice to say, individuals of Dan-el’s intellectual caliber are rare, not just amongst immigrants, but among the human population in general. But Dan-el’s story and his testimonial that there are so many students like him, proves that they are out there, “eager… to contribute to American society; to lend [their] hands and [their] feet to its economy, [their] minds to its intellectual product” (296). By holding onto the rigid and unjust immigration laws that continue to haunt the lives of the undocumented, we, as a country are not only being hypocritical to our self-portrayal as a country of “inclusivity and diversity” (296), a “melting pot” as we so proudly call ourselves, but we are turning away the talents that continue to put us at the forefront of international prestige.

Dan-el Padilla Peralta’s story-telling was captivating and is a novel that can be consumed by academics and the general public alike. Many parts tugged at my heartstrings, while other parts evoked quiet chuckles. I think so many Americans lead lives whose paths never (knowingly at least) cross with someone like Dan-el. Instead, we are fed with the most horrific stories of undocumented immigrants that pervade the newspapers. But through Undocumented, the general American public can gain a more realistic portrayal of undocumented immigrants and their merits that many are so quick to wave away.