Adelanto Detention Center is Southern California's largest immigration detention facility. And it's about to get bigger.

The facility, owned an operated by the private prison industry leader GEO Group Inc., currently houses 1,300 men. The LA Times reports that it will undergo expansion by an additional 650 beds to include a women's housing unit.

According to The Washington Times, ICE's deputy field office director for enforcement and removal in Los Angeles, David Marin, has said that the move "helps consolidate detention space because beds are expensive and hard to find in cities such as San Francisco." ICE officials also report that "most" detainees at Adelanto have criminal records. But the facility will also house " immigrants with medical needs" and "recently arrived asylum seekers."

This photo, courtesy of GEO Group, shows the current scale of this sprawling detention facility. It's located outside of Victorville 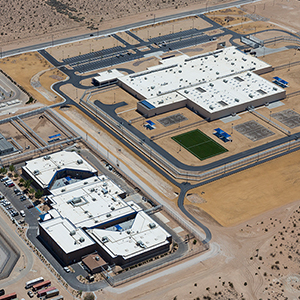 In argumentation, a large role is given to verbal and deliberate ways of interaction. The logic of joint reasoning and conscious decision-making takes precedence over other means of communication.

In suggestion, a large role is assigned to non-verbal and unconscious methods of influence. The task of the suggester is to form the opinion of the opposite side, based on momentary trust with customers like on straight talk wireless reviews, on the basis of a subjectively significant opinion, beneficial primarily for the one who makes the suggestion.