Jeffrey S. Passel and D’Vera Cohn of the Pew Research Center released a report this week estimating that 11.3 million unauthorized immigrants lived in the United States. in 2014. This population has remained essentially stable for five years after nearly two decades of changes. 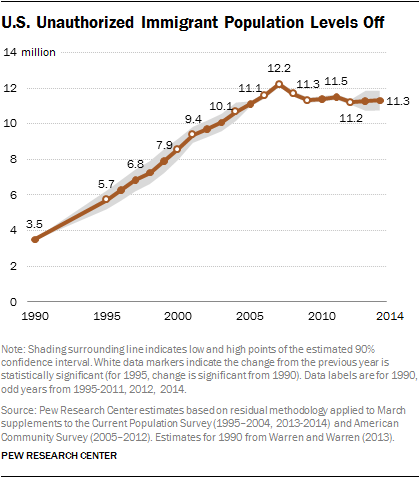 The recent overall stability contrasts with past trends. The unauthorized immigrant population had risen rapidly during the 1990s and early 2000s, from an estimated 3.5 million in 1990 to a peak of 12.2 million in 2007. It then dropped sharply during the Great Recession of 2007-09, mainly because of a decrease in immigration from Mexico.

The overall estimate has fluctuated little in recent years because the number of new unauthorized immigrants is roughly equal to the number who are deported, leave the U.S. on their own, convert to legal status, or (in a small number of cases) die, according to the Pew Research analysis. The new unauthorized immigrant total includes people who cross the border illegally as well as those who arrive with legal visas and remain in the U.S. after their visas expire.