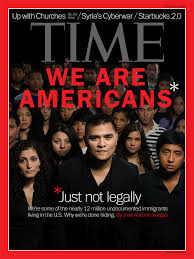 Inspired by Harvey Milk's 1978 "come out" speech, immigrants' rights activist and Pulitzer-Prize winning journalist Jose Antonio Vargas is encouraging undocumented immigrants to "come out" of the undocumented closet.  As readers of this blog may recall, Vargas famously came out in 2011 a NYT Magazine.  As the above picture shows, Vargas was featured with other undocumented Americans in a Time cover story in 2012.

Vargas and his organization, Define American, have launched their "Coming Out" campaign. Vargas notes, "It's time undocumented people and allies come out and share their stories. By doing so, you publicly recognize the humanity of the more than 11 million undocumented Americans who support the immigrant heritage of our nation."

Here's a link to the video: http://bit.ly/da-outfor.

Do you agree that undocumented immigrants should come out and reveal their unauthorized status?

I'll share my thoughts on this question in the next couple of days and blog about the parallels and differences between the LGBT rights movement and immigration justice movement.