Immigration Article of the Day: Race Inequity Fifty Years Later: Language Rights Under the Civil Rights Act of 1964 by Jasmine B. Gonzales Rose 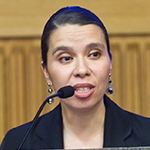 Abstract: As Latinos have become the largest racialized minority in the United States, we should ask whether the civil rights laws of yesterday are equipped to address the race problems of today. Half a century after the passage of the Civil Rights Act of 1964, racial discrimination still exists, but it manifests itself differently. Rather than explicitly barring someone from employment, education, public accommodations, or civic participation on the basis of his or her race, racially discriminatory exclusion is often couched in seemingly race-neutral terms. English language requirements are one example of this. A sign outside a restaurant stating, “No Mexicans, Negros, or Dogs Allowed” (as was prevalent in the Southwest in the 1950s and 1960s) would be unlawful and condemned by the majority of Americans. However, a sign stating, “English only,” even when the common understanding is that in practice it means “No Spanish” and hence “No Latinos,” may survive legal scrutiny and even be celebrated as patriotic. It is often assumed that antidiscrimination laws protect all racial groups equally. This Article questions that assumption and explores the competence of the Civil Rights Act of 1964 to address racial discrimination against Latinos by examining the Act’s treatment of language discrimination in the areas of employment, education, public accommodations, and civic participation — concentrating in the latter respect on jury participation. This examination gives pause for both concern and hope.