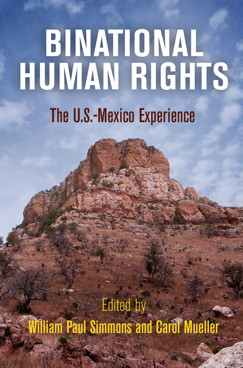 Mexico ranks highly on many of the measures that have proven significant for creating a positive human rights record, including democratization, good health and life expectancy, and engagement in the global economy. Yet the nation's most vulnerable populations suffer human rights abuses on a large scale, such as gruesome killings in the Mexican drug war, decades of violent feminicide, migrant deaths in the U.S. desert, and the ongoing effects of the failed detention and deportation system in the States. Some atrocities have received extensive and sensational coverage, while others have become routine or simply ignored by national and international media. Binational Human Rights examines both well-known and understudied instances of human rights crises in Mexico, arguing that these abuses must be understood not just within the context of Mexican policies but in relation to the actions or inactions of other nations—particularly the United States.

The United States and Mexico share the longest border in the world between a developed and a developing nation; the relationship between the two nations is complex, varied, and constantly changing, but the policies of each directly affect the human rights situation across the border. Binational Human Rights brings together leading scholars and human rights activists from the United States and Mexico to explain the mechanisms by which a perfect storm of structural and policy factors on both sides has led to such widespread human rights abuses. Through ethnography, interviews, and legal and economic analysis, contributors shed new light on the feminicides in Ciudad Juárez, the drug war, and the plight of migrants from Central America and Mexico to the United States. The authors make clear that substantial rhetorical and structural shifts in binational policies are necessary to significantly improve human rights.

William Paul Simmons is Associate Professor of Gender and Women's Studies at the University of Arizona.  Carol Mueller is Professor of Sociology and former Director of the School of Social and Behavioral Sciences at the New College of Interdisciplinary Arts and Sciences at Arizona State University.