From the Bookshelves: Chop Suey, USA: The Story of Chinese Food in America by Yong Chen 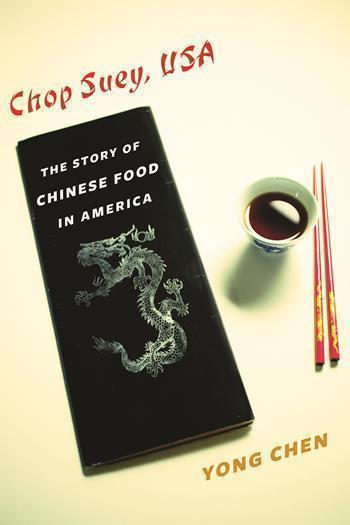 Chop Suey, USA:  The Story of Chinese Food in America by Yong Chen

American diners began to flock to Chinese restaurants more than a century ago, making Chinese food the first mass-consumed cuisine in the United States. By 1980, it had become the country's most popular ethnic cuisine. Chop Suey, USA offers the first comprehensive interpretation of the rise of Chinese food, revealing the forces that made it ubiquitous in the American gastronomic landscape and turned the country into an empire of consumption.

Engineered by a politically disenfranchised, numerically small, and economically exploited group, Chinese food's tour de America is an epic story of global cultural encounter. It reflects not only changes in taste but also a growing appetite for a more leisurely lifestyle. Americans fell in love with Chinese food not because of its gastronomic excellence but because of its affordability and convenience, which is why they preferred the quick and simple dishes of China while shunning its haute cuisine. Epitomized by chop suey, American Chinese food was a forerunner of McDonald's, democratizing the once-exclusive dining-out experience for such groups as marginalized Anglos, African Americans, and Jews.

The rise of Chinese food is also a classic American story of immigrant entrepreneurship and perseverance. Barred from many occupations, Chinese Americans successfully turned Chinese food from a despised cuisine into a dominant force in the restaurant market, creating a critical lifeline for their community. Chinese American restaurant workers developed the concept of the open kitchen and popularized the practice of home delivery. They streamlined certain Chinese dishes, such as chop suey and egg foo young, turning them into nationally recognized brand names.

Yong Chen, raised by his food-loving mother in China, is professor of history at the University of California, Irvine, and served as the institution's associate dean of graduate studies. Among his numerous publications are Chinese San Francisco, 1850-1943: A Trans-Pacific Community. He co-curated a museum exhibit on the history of Chinese restaurants in the United States, and his commentaries on food, immigration, and Sino-American relations appear frequently in the media in four languages.