From the Bookshelves: Latino Heartland: Of Borders and Belonging in the Midwest by Sujey Vega 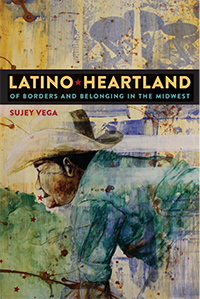 Latino Heartland:  Of Borders and Belonging in the Midwest by Sujey Vega, NYU Press, July 2015

National immigration debates have thrust both opponents of immigration and immigrant rights supporters into the news. But what happens once the rallies end and the banners come down? What is daily life like for Latinos who have been presented nationally as “terrorists, drug smugglers, alien gangs, and violent criminals”?

Latino Heartland offers an ethnography of the Latino and non-Latino residents of a small Indiana town, showing how national debate pitted neighbor against neighbor—and the strategies some used to combat such animosity. It conveys the lived impact of divisive political rhetoric on immigration and how race, gender, class, and ethnicity inform community belonging in the twenty-first century. Latino Heartland illuminates how community membership was determined yet simultaneously re-made by those struggling to widen the scope of who was imagined as a legitimate resident citizen of this Midwestern space. The volume draws on interviews with Latinos—both new immigrants and long-standing U.S. citizens—and whites, as well as African Americans, to provide a sense of the racial dynamics in play as immigrants asserted their right to belong to the community. Latino Hoosiers asserted a right to redefine what belonging meant within their homes, at their spaces of worship, and in the public eye. Through daily acts of ethnic belonging, Spanish-speaking residents navigated their own sense of community that did not require that they abandon their difference just to be accepted.

In Latino Heartland, Sujey Vega addresses the politics of immigration, showing us how increasingly diverse towns can work toward embracing their complexity.