From the Bookshelves: Undocumented: A Dominican Boy’s Odyssey from a Homeless Shelter to the Ivy League by Dan-el Padilla Peralta 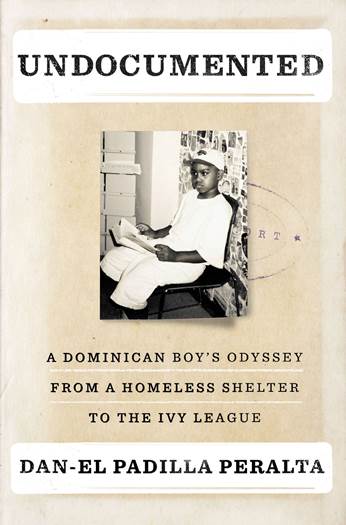 Undocumented: A Dominican Boy’s Odyssey from a Homeless Shelter to the Ivy League by Dan-el Padilla Peralta Edited by Virginia Smith Younce

Dan-el Padilla Peralta has lived the American dream. As a boy, he came here legally with his family. Together they left Santo Domingo behind, but life in New York City was harder than they imagined. Their visas lapsed, and Dan-el’s father returned home. But Dan-el’s courageous mother was determined to make a better life for her bright sons.

Without papers, she faced tremendous obstacles. While Dan-el was only in grade school, the family joined the ranks of the city’s homeless. Dan-el, his mother, and brother lived in a downtown shelter where Dan-el’s only refuge was the meager library. There he met Jeff, a young volunteer from a wealthy family. Jeff was immediately struck by Dan-el’s passion for books and learning. With Jeff’s help, Dan-el was accepted on scholarship to Collegiate, the oldest private school in the country.

There, Dan-el thrived. Throughout his youth, Dan-el navigated these two worlds: the rough streets of East Harlem, where he lived with his brother and his mother and tried to make friends, and the ultra-elite halls of a Manhattan private school, where he could immerse himself in a world of books and where he soon rose to the top of his class.

From Collegiate, Dan-el went to Princeton, where he thrived, and where he made the momentous decision to come out as an undocumented student in a Wall Street Journal profile a few months before he gave the salutatorian’s traditional address in Latin at his commencement.

Undocumented is a classic story of the triumph of the human spirit. It also is the perfect cri de coeur for the debate on comprehensive immigration reform.