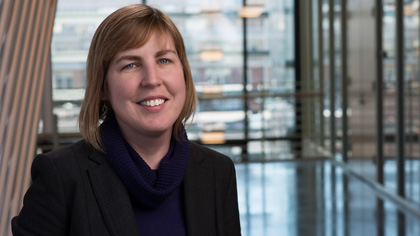 Yesterday, the Supreme Court decided Kerry v. Din.  Over the next few weeks, the ImmigrationProf blog will be running an on-line symposium with immigration professors analyzing various aspects of the decision.  The first installment is by Elizabeth Keyes (Baltimore):

Justice Scalia’s plurality opinion in Kerry v. Din appears to be more a blow against the role of evolving social norms in rights jurisprudence than it is a response to the pressing issues raised by Ms. Din’s case.  There is an almost nostalgic wistfulness in his use of history in this case, which called to mind his famous argument in Harmellin v. Michigan that mandatory penalties may be cruel, but they are not unusual—and therefore can be permitted, a triumph of formalism over reality. In Kerry v. Din, he employs history with a similar, unsurprisingly conservative result, since small-c conservatism regards change, and changing values, with the utmost suspicion. In this instance, he looks to decades of immigration history that have been critiqued by everyone from legislators to law professors, from presidents to practitioners alike as racist and sexist, as proof that the family interests of Ms. Din, and particularly her marital interests, do not rise to the level of fundamental rights.  Because we did these things for so long and so pervasively, the constitutional matter (for Justice Scalia) is clearly settled: we can continue being the way we were.

His reliance on Kerry Abrams’ thoughtful What Makes the Family Special? makes the Good Justice guilty of the same picking-and-choosing he disdains in, well, anyone else. Professor Abrams lays out the immigration history neutrally, to understand what values it might be expressing, and how those values sometimes complement and sometimes compete with each other. But her conclusion is hardly something social conservatives want to laud: that if we are concerned about issues like integration, labor and social engineering, perhaps the best result would be a system that did not use marriage as a proxy, but instead looked at the multitude of ways people have of raising children inside and outside of marriage—privileging function over form.

What is lost in the haze of this historic nostalgia is the actual position Ms. Din is in. Ms. Din faces a “choiceless choice,” borrowing the words of Professor David Thronson. Justice Scalia describes as “strange” the idea that Ms. Din has been deprived of something, since—clearly—the Government is not taking away her marriage, just her ability to be with her husband in the United States. But Ms. Din was a refugee, someone whose fear of death or other persecution was so great that the U.S. Government itself found her fears objectively reasonable. To say she has lost nothing because she cannot enjoy the sanctuary of the United States with her husband is to deliberately misunderstand global migration. Perhaps there is a mythic Brigadoon, a town appearing just when needed, where she and her husband could lawfully dwell. But on June 15, 2015, in the non-fictional world, where exactly might they live together? Canada? No, her asylum claim was litigated here first, and under the Safe Third Country Agreement in effect with Canada for more than a decade, she is out of luck. Europe? Recent events and not-so-recent events suggest otherwise. Australia? Not a refuge for those fleeing violence in Asia. As a factual matter, then, Ms. Din has been deprived of something important—something fundamental. By dodging the specifics of Ms. Din’s loss of liberty, Justice Scalia has been able to use Kerry v. Din as a platform for his crusade against “shallowly-rooted” values in American society—a fight he surely senses he is losing as a political, popular and ultimately jurisprudential matter.

While I reserve most of my disagreement for Justices Scalia, Roberts and Thomas, I also find Justices Kennedy and Alito too far from reality in this particular matter (and since Justice Alito was highly concerned with on-the-ground-realities of the complexity of immigration law in his Padilla v. Kentucky concurrence, this is disappointing). With due respect to consular officers who handle high volumes of applications from anxious would-be immigrants and nonimmigrants (more temporary entrants), consular officers make mistakes. This is not a shocking revelation, but a well-documented one. And not all mistakes are equally consequential, or at least not obviously so. But if we see would-be immigrants as having varying levels of claims upon us—and as a constitutional matter we do, from Mr. Fleuti to Ms. Plasencia—we can see a difference between an adjudication of a visitor visa for someone with no family or employment ties in the United States, and that of the husband of a U.S. citizen. Decisions for the latter do merit something more than a cursory citation to an overbroad, under-scrutinized provision. May the next case focus more on that issue of reviewability, and open the door a bit wider to a fair process.