Symposium on Kerry v. Din: Due Process Rights, Beyond Marriage by Rachel Rosenbloom 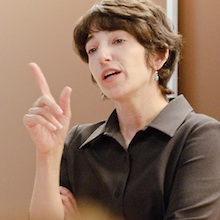 The symposium on Kerry v. Din continues with this contribution by Professor Rachel Rosenbloom (Northeastern):

Due Process Rights, Beyond Marriage by Rachel Rosenbloom

Elizabeth Keyes has provided a critique of Justice Scalia’s plurality opinion in Kerry v. Din, and Geoffrey Heeren has taken on Justice Kennedy’s concurrence.  I am joining in with some thoughts on Justice Breyer’s dissent.

As Kevin Johnson has pointed out, Kerry v. Din was ostensibly a case about the judicial review of consular visa decisions but somehow – perhaps due to the Court’s current preoccupation with the question of same-sex marriage – ended up mostly being a forum for the justices to argue about the scope of due process protections related to marriage. Writing for the plurality, Justice Scalia held that Fauzia Din, a U.S. citizen, has no constitutionally protected liberty interest in living in the United States with her husband, Afghani citizen Kanishka Berashk, and thus no right to procedural due process regarding the denial of his visa. However, Scalia garnered the votes of only two other justices, Roberts and Thomas, for this view.  In a concurring opinion joined by Justice Alito, Justice Kennedy wrote that the disposition “should not be interpreted as deciding whether a citizen has a protected liberty interest in the visa application of her alien spouse” because, in his view, the bare-bones explanation provided by the State Department was in any case sufficient to satisfy due process.

The dissenting justices – Breyer, Ginsberg, Sotomayor, and Kagan – would have held both that Din had a protected liberty interest based on her marriage to Berashk, and that the State Department’s minimal disclosure regarding the reasons for the denial failed to meet the requirements of due process.  At the center of the dissent is the notion that “the law, including visa law, surrounds marriage with a host of legal protections to the point that it creates a strong expectation that government will not deprive married individuals of their freedom to live together without strong reasons and (in individual cases) without fair procedure.”

As other contributors have already noted, Kerry v. Din is a disappointment to those who were hoping for the demise of the doctrine of consular non-reviewability. Justice Kennedy’s concurrence sets the bar for due process so low as to be almost meaningless. (Berashk was initially informed only that he had been deemed inadmissible under Section 212(a) of the Immigration and Nationality Act, which contains every single ground of inadmissibility that could possibly bar him.  He was later informed that he was deemed inadmissible under 212(a)(3)(B), a lengthy subsection that spans a broad range of terrorism-related grounds, from the very serious to the very minor, including some grounds for which Berashk, if armed with more information, might have sought an exception.)

Nevertheless, six justices were willing to engage in at least some degree of judicial review of a consular visa denial. More challenges of visa denials are sure to follow – and it remains to be seen whether lower courts might be willing to venture into a more robust procedural due process analysis, particularly in cases that do not involve terrorism allegations.  Thinking ahead to future cases, it is worth noting at this juncture (particularly with a decision on same-sex marriage expected any day now) that within the LGBT rights movement, many have questioned the increasingly narrow focus on marriage as a source of rights. It would be a shame if Justice Breyer’s heavy reliance on marriage in his dissent in Kerry v. Din exerts too strong a force on the future litigation of consular review cases.

It is easy to see why marriage was so central to the case, in light of the Court’s longstanding precedent that “[w]hatever the procedure authorized by Congress is, it is due process as far as an alien denied entry is concerned.” That particular holding, dating from the Cold War, originated in the case of another immigrant visa applicant married to a U.S. citizen:  Ellen Knauff, who worked for the U.S. War Department in postwar Germany and married a U.S. army veteran, but found herself barred from entering the United States based on secret evidence regarding alleged national security concerns.  The Court’s refusal to recognize any possibility of a due process claim in Knauff v. Shaughnessy has led, not surprisingly, to litigation strategies that foreground the claims of affected U.S. citizens.

As litigation on consular review continues to evolve, we should at the very least keep in mind that there are other relationships outside marriage that might give rise to claims by U.S. citizens regarding visa denials. (Kleindienst v. Mandel, the case on which the concurrence most closely relies, involved the First Amendment rights of professors hoping to engage in an exchange with a foreign scholar.)  More ambitiously, we might even ask (once again) why a noncitizen who goes through the lengthy process of applying for an immigrant visa is not entitled in his or her own right to information about the reason for a denial. In the decades since Knauff was decided, the Supreme Court has taken significant strides toward recognizing the constitutional rights of noncitizens within our borders (for example in Landon v. Plasencia and Zadvydas v. Davis) and even, in limited circumstances, of those outside our borders (for example in Boumediene v. Bush).  Kerry v. Din is certainly not the last word on consular review, and hopefully future cases will raise some of these broader due process questions.