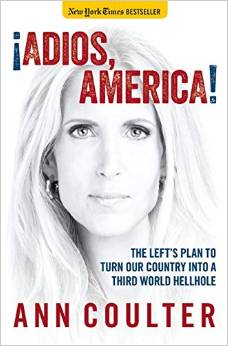 Immigration has been a hot topic in politics in recent years. Presidential campaigns, gubernatorial campaigns, safe to say, the campaigns for many high political offices of this country, ring loud with candidates’ stances on immigration policies. Social and political commentator, writer, syndicated columnist, and lawyer, Ann Coulter, while not running for office, has also chimed in with her stance, in her new book, Adios America. But Coulter’s opinion on the subject stands in stark contrast to the stances bellowed out by high office hopefuls. Coulter believes the U.S. should implement an immigration policy that excludes all immigration, even legal immigration, from poor countries. In other words, Coulter is advocating a more expansive version of the highly controversial Chinese Exclusion Act of 1882. Adios America is Coulter’s warning to the world, about the danger of allowing legal immigration from poorer countries to continue. Taking into account the percentage of those immigrants whose sustenance comes from government welfare checks, the resources the government utilizes to combat social problems in those immigrant communities, etc., Coulter proclaims in Adios America that “today’s immigrants aren’t coming here to breath free, they’re coming to live for free.”

Yet, it would be interesting to see how Coulter addresses the benefits immigrants from those countries have provided for the United States

Coulter has embraced a new politics of race in which white is supreme.