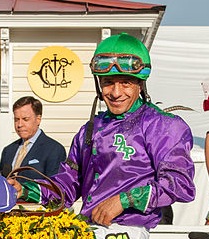 Today, jockey Victor Espinoza rode thoroughbred American Pharaoh to victory, winning the Triple Crown. After already placing first in the Kentucky Derby and the Preakness Stakes, tonight the dynamic duo won the Belmont Stakes as well. This is the first time since 1978 that this level of success has been achieved in the United States.

Victor Espinoza was born in Mexico, where he lived with 11 siblings on a farm outside of Mexico City. Some 25 years ago, Espinoza drove a bus in Mexico City, trying to finance a career as a jockey.

Espinoza first saw success at Mexico City's Hippodromo de las Americas in 1992. The next year, he immigrated to United States and became a leading apprentice rider in California.

“Work hard and treat your career as a job.  Always remember, it’s easy to get to the top, it’s very difficult to stay there.  When you’re doing good, you need to work harder.  I would say, look forward, never look back.  Everybody has a right to have fun, but your job has to come first.”

Congratulations on your success today!