From the Bookshelves: Dream Chasers: Immigration and the American Backlash by John Tirman 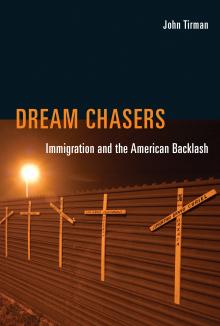 Illegal immigration continues to roil American politics. The right-wing media stir up panic over “anchor babies,” job stealing, welfare dependence, bilingualism, al-Qaeda terrorists disguised as Latinos, even a conspiracy by Latinos to “retake” the Southwest. State and local governments have passed more than 300 laws that attempt to restrict undocumented immigrants’ access to hospitals, schools, food stamps, and driver’s licenses. Federal immigration authorities stage factory raids that result in arrests, deportations, and broken families—and leave owners scrambling to fill suddenly open jobs. The DREAM Act, which would grant permanent residency to high school graduates brought here as minors, is described as “amnesty.” And yet polls show that a majority of Americans support some kind of path to citizenship for those here illegally. What is going on? In this book, John Tirman shows how the resistance to immigration in America is more cultural than political. Although cloaked in language about jobs and secure borders, the cultural resistance to immigration expresses a fear that immigrants are changing the dominant white, Protestant, “real American” culture.

Tirman describes the “raid mentality” of our response to immigration, which seeks violent solutions for a social phenomenon. He considers the culture clash over Chicano ethnic studies in Tucson, examines the consequences of an immigration raid in New Bedford, and explores the civil rights activism of young “Dreamers.” The current “round them up, deport them, militarize the border” approach, Tirman shows, solves nothing.

John Tirman is the author of The Deaths of Others: The Fate of Civilians in America’s Wars, 100 Ways America is Screwing Up the World, and other books. He is Executive Director of MIT’s Center for International Studies, where he is also Principal Research Scientist.