From the Bookshelves: Entangling Migration History: Borderlands and Transnationalism in the United States and Canada Edited by Benjamin Bryce and Alexander Freund 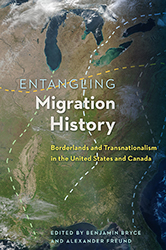 Entangling Migration History: Borderlands and Transnationalism in the United States and Canada Edited by Benjamin Bryce and Alexander Freund (University Press of Florida 2015).

For almost two centuries North America has been a major destination for international migrants, but from the late nineteenth century onward, governments began to regulate borders, set immigration quotas, and define categories of citizenship. To highlight the complexities of migration, the contributors to this volume focus on people born in the United States and Canada who migrated to the other country, as well as Japanese, Chinese, German, and Mexican migrants who came to the United States and Canada. These case studies go beyond the confines of national historiographies to situate the history of North America in an international context.

By including local, national, and transnational perspectives, the editors emphasize the value of tracking connections over large spaces and political boundaries and, in so doing, present rich new scholarship to the field. This volume ultimately contends that crucial issues in the United States and Canada, such as labor, economic growth, and ideas about the racial or religious makeup of the nations, are shaped by the two countries’ connections to each other and the surrounding world.

Here is the table of contents.