California, it's time to dump the Bear Flag? 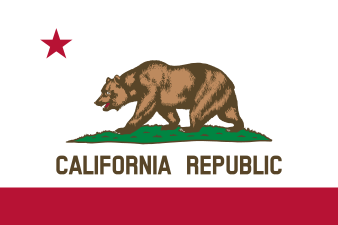 The Bear Flag is the official flag of the state of California.  Alex Abella, in a Los Angeles Times op/ed  ("California, it's time to dump the Bear Flag"), says that it is time for a new state flag.  Abella offers an interesting take on the "revolt" that led to a new state breaking off from Mexico:

"One hundred and sixty nine years ago in a frontier town, a band of thieves, drunks and murderers hoisted a home-made flag and declared themselves in revolt from a government that had welcomed them. Instigated by an expansionist neighboring power, the rebels aimed to take over completely and impose their language, culture and mores on the land. The revolt succeeded beyond anyone's expectations.

That frontier town was Sonoma, the land was California, and the rebels, American settlers spurred on by promises of help from U.S. Army Captain John Fremont. The rebel standard, the flag of the so-called California Republic, became the California State Flag. It's time California dump that flag, a symbol of blatant illegality and racial prejudice. Like the Confederate cross of St. Andrew, the Bear Flag is a symbol whose time has come and gone. . . .

Why did the Bear Flag revolt occur? Because these rogues were also illegal immigrants who feared they might be deported by the Mexican government. They despised the native, Spanish-speaking Californios, whom they called greasers. Refusing to become citizens, a move that would have granted them voting rights and land, they looked to the American takeover of Texas as an example."