Understanding the Migrant Journey and the Business Model of Smuggling Networks

Facing unprecedented numbers of asylum seekers and other migrants seeking to gain entry to Europe via the often perilous Central Mediterranean route, European policymakers are drawing upon an incomplete evidence base as they seek to stem the flow of boats that are largely responsible for the inflow of more than 220,000 people in 2014, a new Migration Policy Institute Europe report argues. 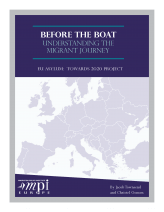 The report, Before the boat: Understanding the migrant journey, makes the case that policymakers are making decisions ‘while in the dark’ about the decision-making process and the assessment of risk that migrants face at every step of the journey. They also lack detailed insight about the business model of the smuggling networks that are delivering often desperate people to Europe’s doorstep in exchange for significant remuneration, argue authors Jacob Townsend and Christel Oomen of Farsight, a Brussels-based social enterprise with a focus on migration that has organised interviews with thousands of migrants and would-be migrants.

The report, which draws on findings from migrant interviews, suggests that prior research has been limited in scope, hampered by a number of factors, including a ‘destination bias’ that analyses movements from the perspective of destination countries and successful migrants, not those who abandoned their quest en route or before setting off. There is also a dearth of research on the organisational structures and the political economy of migrant-smuggling networks, which hampers attempts to crack down on them.

The authors also challenge the idea that migrants must have been unaware of the risks of maritime crossings or have received inadequate information. Interviews with migrants, the authors report, suggest they are highly attuned to threats, and may accord more importance to the goal of long-term settlement than risks to immediate safety.

The report is the latest in a research project, ‘EU Asylum: Towards 2020’, conducted by MPI Europe and International Migration Institute/Open Society Foundations. For earlier reports in the project, visit here.