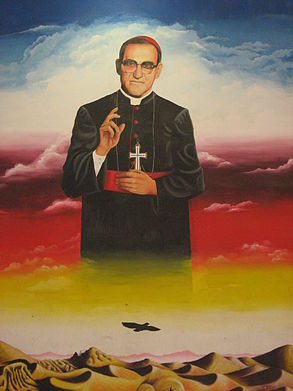 CNN reports that, 35 years after being assassinated while holding mass, Archbishop Oscar Romero was beatified on Saturday, bringing the slain priest a step closer to sainthood in the Catholic Church. Tens of thousands of people crowded El Salvador's Savior of the World Plaza for the bestowing of the honor. Romero was a hero of the liberation theology movement, which views the church as properly siding with the oppressed.  His beatification was delayed for years because Romero was controversial within the Church. Pope Francis declared Romero a martyr earlier this year.

I had the opportunity in 1986 -- a time in which political violence was rampant in the country -- to visit Archbishop Romero's tomb in the Cathedral of San Salvador.  It was a moving experience and clearly a scared place to the people of El Salvador.  President Obama visited the tomb on a trip to Latin America in 2011.

The movie Romero, starring Raul Julia as the Archbishop, tells of Archbishop Romero's experiences and is well worth seeing.