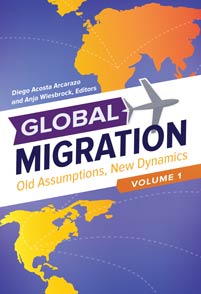 Even in an age of mobility, 97 percent of people stay in the country where they were born.

This three-volume work exposes myths and debunks misinformation about global migration, an issue generating emotional debate from the highest levels of power to kitchen tables across the United States, Europe, and worldwide. Many don't realize that migration has been a central element of global social change since the 15th century. Unfortunately, misconceptions about the 3 percent of world citizens who do choose to migrate can be destructive. In 2008, riots broke out in South Africa over workers from neighboring countries. Today's rising tensions along the U.S.-Mexican border are inciting political, social, and economic upheaval. In the EU, political fortunes rise and fall on positions regarding the future of multiculturalism in Europe.

Relying on fact, not rhetoric, this three-volume book seeks to inform readers, allay fears, and advance solutions. While other reference works tend to limit their scope to one country or one dimension of this hot-button issue, this book looks at the topic through a wide and interdisciplinary lens. Truly global in scope, this collection explores issues on all five continents, discussing examples from more than 50 countries through analysis by 40 top scholars across 8 disciplines. By exploring the past, present, and future of measures that have been implemented in an attempt to deal with migration—ranging from regularization procedures to criminalization—readers will be able to understand this worldwide phenomenon. Both the expert and the general reader will find a wealth of information free of the unsustainable claims and polarized opinions usually presented in the media.

Here is the introductory chapter of this book.

Dispels numerous common myths surrounding migration, providing more depth and perspective than what is usually presented in the media Supplies the broad scope, accessibility, and utility to serve nearly every audience, making this three-volume work an ideal choice for libraries seeking to purchase one reference work on immigration

Authors: Diego Acosta Arcarazo, PhD, is a lecturer in law at the University of Bristol, UK. He holds a doctorate in EU migration law from King's College University, London, UK, and he previously lectured at the University of Sheffield. His published works include The Long-Term Resident Status as a Subsidiary Form of EU Citizenship and EU Security and Justice Law.

Anja Wiesbrock, PhD, is a senior judicial advisor at the Research Council of Norway. She has previously worked as an assistant professor in EU Law at the Department of International and European Law of Maastricht University, Maastricht, the Netherlands. Her published works include Legal Migration to the European Union and The Greening of European Business Under EU Law: Taking Article 11 TFEU Seriously.

Their book has benefited from the input of an advisory board composed of UN Rapporteur on the Rights of Migrants François Crépeau; the former UN rapporteur, Jorge Bustamante; and five key migration scholars: Professors Aderanti Adepoju, Binod Khadria, Wei Li, Kees Groenendijk, and Andrew Geddes. The contributors are leading scholars from five continents in eight different disciplines.