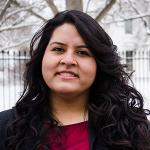 Vox and the New York Times report that the Hillary Clinton campaign for the Presidency has already hired the national director of Latino outreach. Lorella Praeli has credibility with immigration activists.  Praeli is part of the generation of young unauthorized immigrants that has been at the forefront of the immigrant rights movement. Praeli came to the United States from Peru at age 10, but didn't find out she was undocumented until she was a senior in high school. (Shebecame a lawful permanent resident in 2012.) For the past few years, she's been the director of policy and advocacy for United We Dream, a leading immigrant rights activist group.