Ann Coulter is in the immigration news.  To promote her new book, Adios, America, Coulter sat down with Jorge Ramos for a town hall-style interview. At one point, immigration activist Gaby Pacheco stood up and asked if she could give Coulter a hug. Coulter awkwardly declined

Here is a description on Amazon.com of Coulter's new book:

"Ann Coulter is back, more fearless than ever. In Adios, America she touches the third rail in American politics, attacking the immigration issue head-on and flying in the face of La Raza, the Democrats, a media determined to cover up immigrants' crimes, churches that get paid by the government for their `charity,' and greedy Republican businessmen and campaign consultants—all of whom are profiting handsomely from mass immigration that's tearing the country apart. Applying her trademark biting humor to the disaster that is U.S. immigration policy, Coulter proves that immigration is the most important issue facing America today."

UPDATE (May 30): Yesterday, Ann Coulter said in an email to Breitbart News that if she ran the immigration system, she wouldn’t “admit overweight girls” into the United States. Coulter’s comments were reportedly made in response to a question about the incident that occurred earlier in the week when Coulter refused to hug Gaby Pacheco during an audience Q&A on the cable network Fusion. 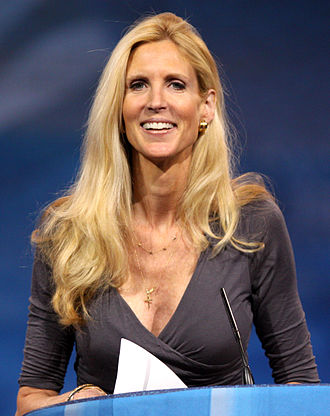