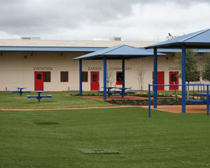 Three immigrant women who say they were punished for joining a hunger strike in a Texas family detention center on Thursday sued U.S. Immigration and Customs Enforcement and GEO Group, the private company that operates the facility. The class action lawsuit was filed in federal court against ICE Director Sarah Saldaña and personnel at the Karnes County Residential Center, seeks to prohibit ICE and GEO from putting women and their children in isolation as punishment for protesting, and from threatening to separate mothers from their children.   The University of Texas Civil Rights Clinic filed the lawsuit on behalf of the women.

The women were part of a wave of families that crossed the border without proper authorization and have sought asylum in the United States.  The vast majority traveled by land from the violence in the Central America countries of El Salvador, Honduras and Guatemala.

Click here and here for more on this story.