Immigration Film of the Day: Anayansi Prado's "Children In No Man's Land"

Filmmaker Anayansi Prado has a new documentary, "Children in No Man's Land," which features the stories of children who immigrated to the United States without their parents. 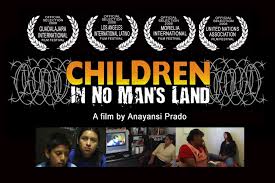 Info from the film's website: "Every year, more and more children are immigrating to the United States without a parent or legal guardian. At any given time, an average of 700 unaccompanied minors are being detained by the U.S. Homeland Security Department (formerly known as Immigration and Naturalization Services or I.N.S.). The majority of the 85,000 undocumented immigrants under 17 arrested in 2003 were teenagers, although cases of children as young as 10 traveling alone have been reported. Some of these children come to the United States seeking asylum, others hope to be reunited with family members, and all are simply in search of a better future for themselves. Often, these children are running away from physical, sexual and/or emotional abuse from a parent, relative or guardian. Others are fleeing their countries because of persecution due to their religious beliefs or gender. Many are often homeless and/or orphans. These children are driven by a strong survival instinct assuring them that the United States is their last resource, their salvation. They are willing to risk it all for a chance at a new life. And they do."

UC Davis will be doing a screening of the film and Q & A with Prado on Wednesday, April 15, at 6 PM. If you are interested in screening this film, click here.

This is Prado's second documentary. Her first one, "Maid in America," which is available on PBS, follows the lives of three Latina women who left their homes and immigrated to Los Angeles to work by cleaning other people's homes and caring for their children.