A Bird's Eye View of the Oral Argument Before the Fifth Circuit in Texas v. United States

Nicholas Espiritu of the National Immigration Law Center late yesterday provided this blog report on the oral argument before the U.S. Court of Appeals for the Fifth Circuit in Texas v. United States: 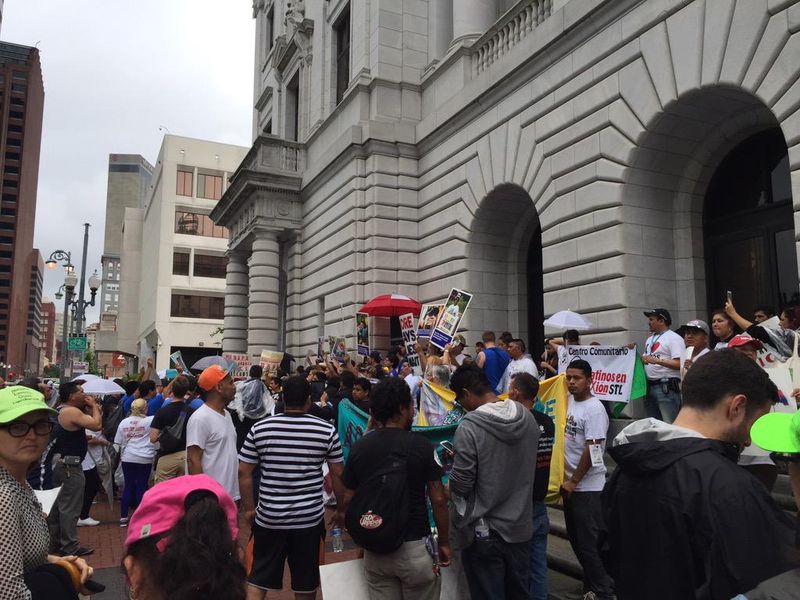 This morning, the line to get into the Fifth Circuit Court of Appeals hearing on motion for a stay pending appeal of the preliminary injunction of the DAPA and expanded DACA initiatives began hours before the courthouse doors opened.  And in the park across the street, protesters were also gathering, some who had caravanned from as far away as Florida, to show their support for these programs. The courtroom and two overflow rooms were filled, with estimates at over 300 people inside the courtrooms for the hearing. The chants of the many more outside reverberated through the thick courtroom walls throughout the over two hours of oral argument. The actions, organized in large part by the New Orleans Center for Racial Justice, reflected a cross section of the city of New Orleans, and the changing demographics of then Nation.

The panel consisted of Judges Jerry Smith, Jennifer Elrod, and Stephen Higginson.  Arguing for the Department of Justice was Ben Mizer, and for the Plaintiff States was the Texas Solicitor General, Scott Keller.  A link to audio of the oral argument can be found here.  The Panel asked questions regarding the Parties’ standing and merits arguments, and what the proper standards for evaluating their respective claims were.

Both Judge Elrod and Higginson seemed fairly dismissive of the Plaintiff States’ abdication standing arguments, albeit for different reasons.  Judge Smith focused on questioning both sides as to what he stated he considered the most relevant case for Plaintiff States’ standing claims—Massachusetts v. EPA, 549 U.S. 497 (2007).  Judge Higginson seemed concerned about lack of limitations implied by the States’ assertion that the cost of issuing driver’s licenses to DAPA and expanded DACA recipients should confer standing, specifically asking the Texas Solicitor General whether under their theory, they would have standing to challenge any individual grant of deferred action or exercise of prosecutorial discretion if it opened up the possibility for any similar costs to the states.  He also seemed concerned about the sufficiency of the evidence supporting the harms asserted by the states, pointing to the counter-veiling and extensive benefits that would accrue from these programs, including those articulated by the various amici, including by states and law enforcement officials in support of the DAPA and expanded DACA initiatives.

A substantial portion of the hearing time was also spent addressing merits issues—specifically the district court’s finding that notice and comment rulemaking was required for the DAPA and expanded DACA programs under the Administrative Procedure Act (APA).  Core to the district court’s APA holding below was a finding that there was a lack of actual discretion in the administrations of the original DACA initiative, and that this rendered the new initiatives subject to public notice and comment rulemaking.  The DOJ suggested that the Panel should look to Brock v. Cathedral Bluffs Shale Oil Co., 796 F.2d 533 (D.C. Cir. 1987) to evaluate whether DAPA and expanded DACA allowed for discretion.  DOJ noted that in the Brock case then-Judge Scalia held that the first step in determining whether an agency retained discretion in its decision-making was to look at what the agency said, and to then look to the implementation of the agency initiative in question.  Judge Higginson pressed both sides to articulate why the immigration agency should not be taken at its word—articulated in the November 20, 2014 memo announcing the DAPA and expanded DACA initiatives—that officers clearly retain discretion when making initiative determinations.

In addition, Judge Higginson expressed concern over whether there was sufficient evidence in the record to allow for a finding that even though the federal immigration agency said it maintained discretion in making DACA determinations that the data on denials showed that any such discretion was “pretextual.” He noted that the district court relied on the relatively low number of denials under the original DACA program as evidence that there was no meaningful discretion being exercised, but asked both sides whether the district court had considered the common sense point  that individuals self-select for initiatives like DACA and that it is most likely that those who are in eligible simply do not apply.  Judge Higginson suggested that this fact would undermine the claim that the lack of a high proportion of denials should be construed as evidence that DAPA and expanded DACA lacked the requisite amount of discretion.

Similarly, Judge Higginson expressed concern that other factors had similarly not been properly evaluated by the district court, including the fact that over 200,000 requests for evidence (RFE’s) had been issued, and that the applicant poll for the original DACA initiative might not be analogous to those who would apply under the new initiatives.  Further, the fact that discretion has been exercised is further bolstered by the evidence presented in the coalition amicus brief of 154 civil rights, immigrants’ rights, and labor groups (including the National Immigration Law Center), demonstrating the exercises of agency discretion in cases where individuals had been denied DACA despite meeting all the specified criteria.  Judge Elrod questioned as to what the panel should do with this record at this stage, and Judge Higginson seemed to suggest that given the record contained conflicting expert reports as to the extent of agency discretion, an evidentiary hearing could be necessary to resolve this question.

The Panel also spent some time on issues that related to the other claims in this case, including the ultimate legality of the initiatives themselves.  Judge Higginson suggested that there were at least three ways that the initiatives could be understood to square with INA, arguing that, 1) in Arizona v. United States, the Supreme Court had recently reaffirmed the central role of discretion in the regulation of immigration, 2) the limited congressional appropriation of money and articulation of removal priorities necessitated the exercise of discretion, and that 3) the benefits of streamlining enforcement could be understood as furthering the federal governments’ mandates under the INA.

It is of course impossible to tell how the Panel will resolve these issues or how it will rule on the pending stay motion, but based on the response from organizers and effected community members inside and outside the courtroom one thing is clear: regardless of the result in court these groups will not give up on their fight for immigration relief, and for justice for immigrant communities.

For the New York Times report on the oral arguments, click here.