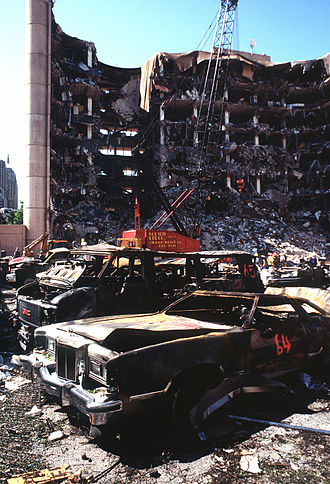 As the media has reminded us, today is the 20th anniversary of the bombing of the federal courthouse in Oklahoma City.  The domestic terrorist bomb attack on the Alfred P. Murrah Federal Building occurred on April 19, 1995. Carried out by Timothy McVeigh and Terry Nichols, the bombing killed 168 people and injured more than 680 others. The blast destroyed or damaged 324 buildings within a 16-block radius, destroyed or burned 86 cars, and shattered glass in 258 nearby buildings, causing at least an estimated $652 million worth of damage.  Extensive rescue efforts were undertaken by local, state, federal, and worldwide agencies in the wake of the bombing.

Within 90 minutes of the explosion, McVeigh was stopped by an Oklahoma State Trooper for driving without a license plate and arrested for illegal weapons possession. Forensic evidence quickly linked McVeigh and Nichols to the attack; Nichols was arrested, and within days both were charged. McVeigh, an American militia movement sympathizer who was a Gulf War veteran, had detonated a Ryder rental truck full of explosives parked in front of the building. McVeigh's co-conspirator, Nichols, had assisted in the bomb preparation. Motivated by his hatred of the federal government and angered by its handling of the 1993 Waco siege and the Ruby Ridge incident in 1992, McVeigh timed his attack to coincide with the second anniversary of the deadly fire that ended the siege at Waco.

The bombers were tried and convicted in 1997. McVeigh was executed by lethal injection on June 11, 2001, and Nichols was sentenced to life in prison. Michael and Lori Fortier testified against McVeigh and Nichols; Michael was sentenced to 12 years in prison for failing to warn the United States government, and Lori received immunity from prosecution in exchange for her testimony.

As a result of the bombing, the U.S. Congress passed the Antiterrorism and Effective Death Penalty Act of 1996, which included a number of immigration-reelated provisiuons, including limiting judicial review of various removal orders.  Later in 1996, Congress built on the immigration provisions of AEDPA in the Illegal Immigration Reform and Immigrant Responsibility Act.  The Oklahoma City bombing thus had immigration law consequences even though the bomb plot was the work of U.S. citizens, not immigrants.

In April 2000, the Oklahoma City National Memorial was dedicated on the site of the Murrah Federal Building, commemorating the victims of the bombing.