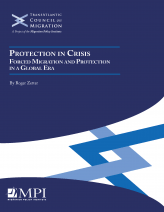 There is a growing consensus that the global refugee system is failing not only those it was designed to protect but also the host states that are providing protection. More than 53 million people worldwide are in a displacement situation as refugees, asylum seekers or internally displaced persons (IDPs)—the highest level since World War II. Ongoing conflicts in Syria, South Sudan, Libya and Iraq and the emerging crisis in Ukraine—as well as more long-standing ones in Somalia and Afghanistan—have demonstrated that current mechanisms are not equitably distributing the responsibility for providing protection, nor are they offering efficient and effective access to refuge for those in need.

The Migration Policy Institute’s Transatlantic Council on Migration today is launching the first in a seven-report series that draws from a recent Council meeting, “Refitting the Global Protection System to Meet the Challenges of Modern Crises.”

The first report, Protection in Crisis: Forced Migration and Protection in a Global Era, details the increasing mismatch between the legal and normative frameworks that define the existing protection regime and the contemporary patterns of forced displacement that are driven by tangled webs of crises that include intrastate conflict, poor governance and instability, environmental degradation and resource scarcity. Many forced migrants now fall outside the recognized refugee and asylum apparatus. And the blurring of the lines between voluntary and forced migration, as seen in “mixed” migration flows, together with the expansion of irregular migration, have further complicated today’s global displacement picture.

The report argues for fundamental reform of the protection system, including shifting the emphasis from the status of the displaced to their needs and situating policies to address displacement within a wider strategic framework that encompasses elements of migration management, host-country development and resettlement support alongside traditional asylum.

Forthcoming reports in the Transatlantic Council series focus on current challenges, including the situation of Syrian refugees in Turkey and rising unaccompanied child migration from Central America to the United States, and propose innovative solutions to rethink global protection—including models that seek to transition refugees from dependence to reliance and the potential of labor mobility to facilitate refugee protection. The series also will feature a policy brief from the UN Deputy High Commissioner for Refugees, T. Alexander Aleinikoff.