The Development of EU Policy on Immigration and Asylum: Rethinking Coordination and Leadership 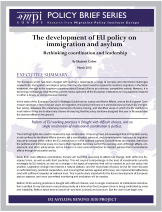 Even as the European Commission launched work earlier this month on a European Agenda on Migration, it is becoming increasingly clear that the current modus operandi of the European institutions is ill equipped to tackle either the short-term responses or longer-term vision necessary to address the complex and interlinked challenges related to EU immigration and asylum policy.

A new Migration Policy Institute Europe policy brief, The development of EU policy on immigration and asylum: Rethinking coordination and leadership, makes the case for adjustment to the underlying mechanics of policymaking in the European space, finding that migration and asylum policy debates must expand beyond the home affairs portfolio and become more of a whole-of-government concern. The current structure inhibits debate, coordination, and the identification of policy solutions across portfolios, MPI Europe Director Elizabeth Collett finds.

The brief calls for appointment of a special representative on migration at EU level who can supplement the leadership of either the External Action Service or the Council President. ‘There is a need to rebuild consensus among constituencies: across EU institutions, between the institutions and the citizenry, and between Member States with sharply divergent interests in immigration’, Collett writes. ‘This promises to be a slow, painstaking process that will require consummate political skill and needs to begin as soon as possible'.

Aside from more effective leadership and coordination, the brief makes clear that Europe will need the resources to effect real change, both within the European Union, as well as with third countries. And the next phase of policy will be less focused on legislative change, with a greater need for consolidation, review, and implementation of the legislation agreed to thus far.

While changes to institutional coordination may appear to pale in priority at a time the European Union is confronting urgent immigration and asylum crises, Collett writes that such reform is imperative at the start of a new European policy cycle and development of a forward-looking agenda on migration.