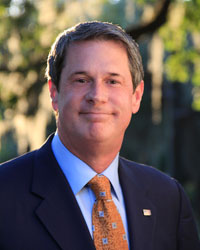 Sen. David Vitter (R-LA) has introduced a measure that purports to end birthright citizenship -- I say "purports" because a statute cannot trump the Constitution and, as interpreted by the Supreme Court for more than a century, the 14th Amendment guarantees birthright citizenship, with a few enumerated exceptions, to all persons born in the United States.  The proposal is an amendment to the Justice for Victims of Trafficking Act, a bipartisan bill currently under consideration in the Senate. Vitter’s effort follows the recent federal raids of alleged birth-tourism locations in Southern California last week.

Senator Vitter is chair of the Border Security and Enforcement First Immigration Caucus.  Its

"members recognize that Congress has presented the American people with a false choice in solving the illegal immigration problem – give illegal aliens amnesty or round them up and deport them en masse. The principle mission of the Caucus is to promote a true, achievable alternative: attrition through enforcement. Living illegally in the United States will become more difficult and less satisfying over time when the government – at all levels – enforces all of the laws already on the books.

The Caucus is a platform to let Americans know that some in the U. S. Senate are continuing to make sure that the laws already on the books will be enforced, act as the voice of those concerned citizens who have expressed their opinions time and time again for interior enforcement and border security, push for stronger border security and interior enforcement legislation, and work together in the U.S. Senate to defeat future legislation that may be considered amnesty."