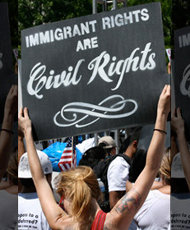 Alison Parker writing for the Marshall Project has an interesting commentary on immigrant detention.

Recent news reports have described an “off-the-books interrogation compound” where Chicago police secretly hold criminal suspects for questioning for hours on end, beyond the reach of lawyers, family members, and basic constitutional protections. People are rightly shocked to learn that police in the US have allegedly been “disappearing” criminal suspects and subjecting them to ill-treatment. But, as Parker points out,

"in the parallel legal universe that is the U.S. immigration system, hundreds of thousands of people are routinely held in detention facilities under similar circumstances — for days, weeks, even months at a time — while they await court hearings or deportation for civil immigration violations.

Family members and lawyers of immigrant detainees often have a tough time finding them. Immigration and Customs Enforcement (ICE), which has custody over immigrants caught in the interior of the US, often doesn’t enter names into its online detainee locator system until at least 72 hours after they have been taken into custody, and sometimes longer. And that’s assuming ICE spells their names correctly in its database,which is not always the case. US Customs and Border Protection (CBP), which has authority over immigrants caught within 100 miles of US borders, doesn’t provide a locator service at all for the individuals detained in at least 130 small substations dotting the border."