European Union and the Geopolitics of Migration 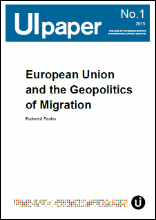 Is the European Union, which permits labor migration among the member nations, a possible model for future immigration?  Commentators have suggested that possibility since the North American Free Trade Agreement went into effect in 1994.

This paper charts the challenges facing the EU in the field of migration, and suggests how Brussels might promote its own form of order. For twenty years now, Europeans have been encouraged to view migration as the epitome of globalisation, the triumph of global economic drive over territorial order. Read the paper European Union and the Geopolitics of Migration for details.