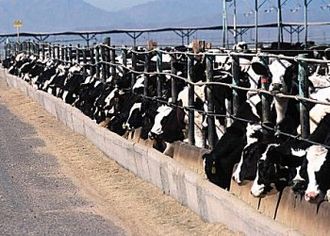 Tina Susman reports in the Los Angeles Times on the complaints of dairy farmers about how the the current immigration laws makes it hard to get workers.

Mike McMahon's Latino employees need to go to the bank, the pharmacy or the grocery store, he makes sure someone drives them to town, waits while they run errands, and then brings them safely back to his dairy farm.  The risk of deportation of dairy workers is a risk that dairy farmers in this agricultural region have faced for years, but it is hitting them harder as immigration reform languishes in Washington and the nation's demand for milk-heavy products like Greek yogurt soars.

"It's just crazy," said McMahon, who has several hundred cows at his farm more than 200 miles north of New York City. "I'm a lifelong Republican," he said, shaking his head. "But I'm telling you, there are days when I think about switching."

Most people think of border and immigration issues as happening in the Southwest, but it's a real across the entire country.  Locals won't do the dirty, manual jobs, farmers say, and immigration laws limit farmers to importing only seasonal agricultural employees. That does not help dairy farmers, who need year-round workers. "The nation's food system is at risk if we can't get this fixed," McMahon said.

Last month, Dean Norton, a dairy farmer who is president of the New York Farm Bureau, traveled to Washington to argue for reform, including a guest-worker program catering to dairy farmers.