Today, I am in Ann Arbor for another excellent immigration conference, this one organized by the Michigan Journal of Law Reform. Professor Margo Schlanger gave a warm welcome. 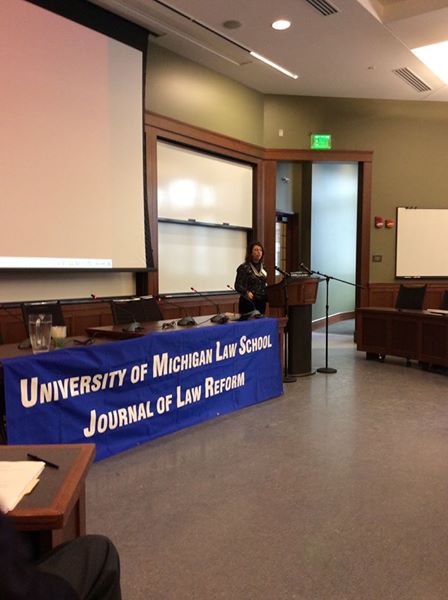 The opening remarks were by Daniel Tichenor, Philip H. Knight Chair of Social Science at the University of Oregon. He spoke on "Compromise and Contradiction: Reassessing an Intricate Reform." Professor Tichenor framed conference by offering contrasting visions of the Immigration Act of 1965, one as a triumphant civil rights moment and the other as a discriminatory setback.

The first panel was on executive action on immigration. The speakers were: Jack Chin, UC Davis, spoke on the McCreary Act of 1893 and the implications of the"first"amnesty of undocumented immigrants under American law for the modern debates over immigration reform and a path to legalization. Pratheepan "Deep" Gulasekaram, Santa Clara discussed a paper on the President and immigration federalism. In that paper, he looks at the state and local government responses to executive action on immigration, such as DACA and DAPA. Steve Legomsky, Washington University, talked about prosecutorial discretion and the Obama administration's deferred action programs. He offered his insights about the legal basis for the Executive Branch's authority for the recently announced immigration initiatives. Daniel Tichenor, Oregon, offered a political science perspective on presidential action on immigration and the reactive nature of presidential action (often in response to social movements).

It was an extremely interesting panel and follow-up discussion on the future of immigration reform.