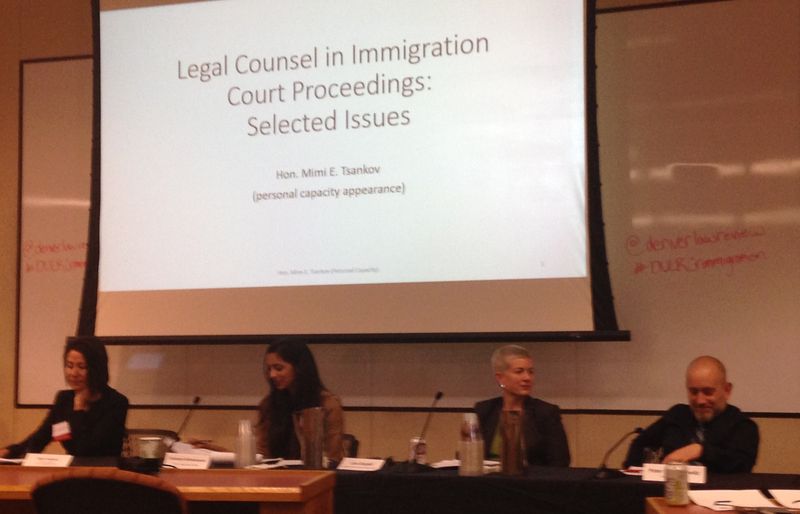 The final panel of the the DU crimmigration conference focused on individual rights in immigration proceedings - focusing largely on legal representation. It was a wonderfully diverse panel including an immigration judge (Mimi Tsankov, in her personal capacity), immprofs (Lisa Graybill - DU and Peter Markowitz - Cardozo), as well as attorneys from the Rocky Mountain Immigrant Advocacy Network (Charyanya Krishnaswami and Abbie Johnson).

IJ Tsankov spoke about legal counsel in immigration court proceedings and efforts by the Denver immigration court to address the needs of unrepresented individuals - such as self-help materials, legal orientation programs, and lists of legal services providers.

Markowitz further humanized the problem of representing detained individuals. He spoke of Sonia, a young Haitian woman detained and separated from her young children (2 and 5) for TWO YEARS despite the fact that she successfully fought pro se against detention early on (DHS appealed and she was detained during the appeal) and despite the fact the fact she was subject to discretionary detention in any event. (When she was released and reunited with her children they were 4 and 7). So, what's the solution to the "vast and profound" problem of unrepresented detainees? According to Markowitz, we need judicial recognition of the right to legal counsel at least for detained individuals.