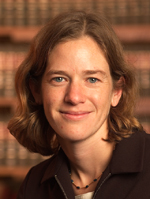 Although law professors often submit amicus briefs in Supreme Court cases in the hope that their scholarship will influence legal doctrine, their arguments often fall on deaf ears. But an amicus brief co-authored by Professor Jeffrey Kahn challenging the doctrine of consular non-reviewability should capture the Court’s attention, in part because Kahn is representing former consular officials who argue in favor of judicial review of their decisions.

Kerry v. Din addresses the doctrine of consular non-reviewability, under which courts are barred from reviewing a consular officer's decision to deny a visa application. In this case, the Ninth Circuit found an exception to that doctrine, reasoning that because the consular officer’s denial of a visa to the husband of a U.S. citizen impinged on the wife’s constitutional rights she had a right to judicial review of that decision, which in turn required the consular officer to give reasons for the denial.  Kahn has co-authored an amicus brief supporting Din, and the brief repeatedly cites Kahn’s academic writing to support the point that consular officers’ decisions should be subject to judicial review in some cases. Unusually, however, it is not submitted on behalf of Khan or other scholars.  Rather, Kahn is representing six former consular officers. Because these amici are in a unique position to understand the role of consular officials in processing visa applications, their involvement gives Kahn’s scholarly arguments greater credibility than they would have had on their own.

The amicus brief contends that not all visa application denials are based on an exercise of consular discretion, as the government’s brief suggested. Rather, these former consular officers explain that they were often forced to deny visas to applicants based on the applicants' inclusion in databases and on watchlists maintained by the Department of Homeland Security, the FBI, and other federal agencies. The consular officers were not told why the applicants’ names appeared in these databases, and they had no right to question their inclusion.  Here, the visa application for Din's husband appeared to have been denied because his name showed up on one of these databases, and not because the consular official processing his application had any reservations about his eligibility for the visa. The brief explains that “[s]hielding the denial of his visa from judicial review [would] erroneously cloak database and watchlist entries in the garb of consular discretion.”

The brief contends that judicial review is a necessary “safety valve” for visa denials that rest on databases and watchlists, which are not always reliable. Kahn has written a book in which he critiqued the government’s use of these databases, in part because of the low standards and minimal oversight that can lead to errors.  (My colleague at American University, Jennifer Daskal, has made similar arguments with respect to the no-fly list in a Cornell Law Review article).  Khan also served as an expert witness in a case in which a federal district court found that a Malaysian student studying in the United States was erroneously placed on the no-fly list, barring her from travel and leading the government to revoke her F-1 student visa, all because an FBI agent mistakenly filled out the wrong form.  That case is cited prominently in the amicus brief as an example of why judicial review of consular visa denials is needed in such cases.  It will be interesting to see whether the Justices take up this issue at oral argument.

Amanda Frost is Professor of Law at American University Washington College of the Law.