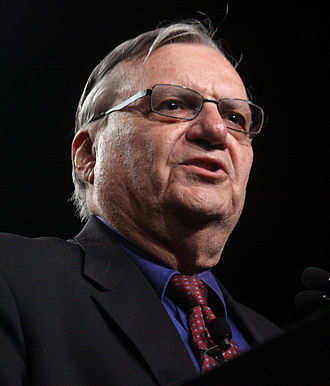 On January 5, federal district judge David Campbell in an order put a stop to the workplace raids that have torn apart countless families in Maricopa County. Judge Campbell determined that the raids instigated by Maricopa County Sheriff Joe Arpaio and supported by Maricopa County Attorney Bill Montgomery are likely unconstitutional and must be stopped, at least until a final decision is rendered in a class action lawsuit.

The preliminary injunction in Puente v. Arpaio bars Arpaio and Montgomery from enforcing portions of two Arizona statutes, A.R.S. § 13-2008 and § 13-2009 that have been using to criminalize undocumented workers. Judge Campbell concluded that these workplace raids cause irreparable harm to Puente members and that plaintiffs are likely to succeed with their legal challenge.

The judge ordered an end to the workplace raids. The Court held that “Plaintiffs have shown that these laws are likely to be found unconstitutional” and that members of Plaintiff Puente would face irreparable harm in the absence of a court order enjoining enforcement.

“This is an enormous victory for our community,” said Carlos Garcia, executive director of Puente, a Phoenix-based human rights group that is the lead plaintiff in the lawsuit. “Arpaio and Montgomery are being stripped of the tools they use to illegally terrorize immigrant workers and families. We hope that justice will continue to prevail, that not one more worker is arrested for providing for his or her family and that the racist, anti-immigrant machine for which Arizona is known is dismantled completely.”

“When I was led away from my job in handcuffs, I never thought I would see the day that we took Arpaio and Montgomery to court instead of the other way around,” said Noemi Romero, who was arrested in a raid in 2012. “We lost our fear and made this lawsuit happen, and now others in our community won’t have to suffer like we did.”

“The decision puts an end to cruel and unlawful practices that have separated families and disrupted communities throughout Maricopa County," said Jessica Karp Bansal, NDLON's Litigation Director, counsel on the case. Bansal continued, “Neither the Maricopa County Sheriff nor the County Attorney are above the law, and this decision stands for the principle that they can no longer unconstitutionally criminalize the immigrant community with impunity.”

The case alleges that portions of A.R.S. § 13-2008 and § 13-2009 are preempted by federal law and violate the Equal Protection Clause of the U.S. Constitution. In addition to Puente and Rev. Frederick-Gray, Glendale resident Sara Cervantes Arreola is a plaintiff in the case. Attorneys on the case include Professors Annie Lai and Sameer Ashar of the UCI Law Immigrant Rights Clinic; Jessica Karp Bansal of NDLON; Dan Pochoda of the ACLU of Arizona Foundation; and Ray Ybarra Maldonado of the Law Office of Ray A. Ybarra Maldonado.