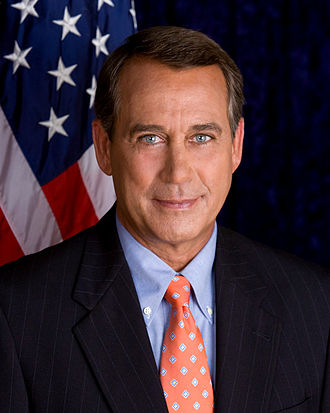 A number of states, led by Texas, have filed suit challenging the constitutionality of the Obama administration's immigration initiatives.  Will Congress be next in line?

ABC News reports that Speaker John Boehner told House Republicans in a closed-door meeting that a lawsuit might be the best –- or only –- option to try and overturn President Obama’s executive action on immigration. “We are finalizing a plan to authorize litigation on this issue, one we believe gives us the best chance of success,” Boehner reportedly told GOP lawmakers at their weekly conference meeting.  One month before the Homeland Security Department runs out of funding, Republican leaders are looking for alternative ways to express their displeasure over the president’s immigration initiatives. The department runs out of money on Feb. 27 and Republican leaders are unwilling to risk another government shutdown.

UPDATE (1/29): CNN reports that Speaker Boehner confirmed that House Republicans are filing a lawsuit against President Obama's immigration initiatives. "The President's overreach when he took executive action to deal with the immigration problems in our country, frankly, in my view, is a violation of our Constitution."