Brushing up your Spanish the Michel Thomas Way 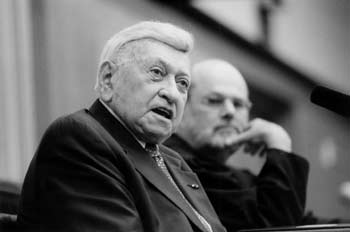 Michel Thomas was an extraordinary man. Born in Poland in 1914, Thomas left the country as a young man, studying in Germany and France in an effort to escape antisemitism. During WW2, he served in the French Resistance and ended up spending two years in French concentration camps. After the war, Thomas moved to the United States where he spent a lifetime teaching Hollywood stars to master foreign languages.

While Thomas passed away in 2005, his method for language learning lives on in audiotapes.

I was introduced to the Michel Thomas method by my colleague Lindsay Robertson. Lindsay knew that I was trying to brush up on my Spanish before heading to the immigration detention facility in Artesia, NM. In a past life, my Spanish was excellent. I studied through college - taking advanced literature courses and studying abroad. But it had been over a decade since I tried to use my skills.

I did many things to bring my Spanish back up to speed - and will post about them all, eventually. But without a doubt the most surprisingly effective tool was the Total Spanish series by Michel Thomas.

The Thomas CDs are different from anything I've ever listened to before. You listen as he teaches two students how to speak Spanish. In effect, you are the third student in the room. It's extra fun because one of the students isn't very good and so you won't feel like the dunce in the room as you practice.

Thomas emphasizes practical communication skills - pointing out the thousands of words that are largely the same in English and Spanish. As a result, you end up with a much more sophisticated vocabulary that you would if you tried to learn words one at a time.

These langauge CDs are a truly effective tool, whether you are looking to learn Spanish for the first time or looking to brush up on skills you already have. I'd actually recommend that clinics around the country invest in a copy for their students to borrow. (OU has a set available for students in our International Human Rights Clinic.)

Finally, I should also note that Michel Thomas was a polyglot. His language CDs are not just available in Spanish but a multitude of other languages.