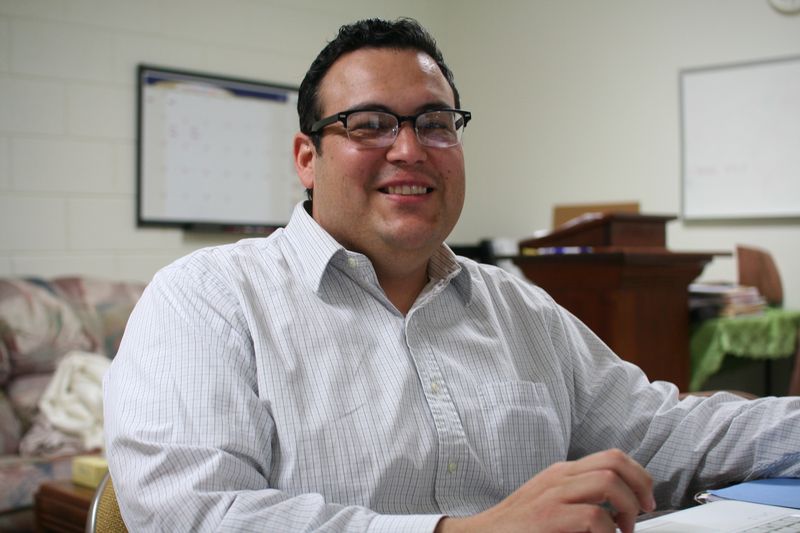 One of my fellow volunteers at Artesia was Eric Dominguez, pictured above hard at work in the church conference room that served as volunteer headquarters. Eric's natural good humor made working under incredibly difficult circumstances not just bearable but enjoyable. And his help with clients was invaluable. When a client asked me to call her partner's boss to try and elicit his help with posting a high bond, I had no idea how to approach the task. Eric suggested that I call and simply begin by saying "I understand that you have some questions about posting bond." It worked like a charm.

Eric came to Artesia from Orange County, California. He is a lawyer in the prestigious immigration firm Fragomen, where he focuses on immigrant and nonimmigrant visas for small, mid-size, and large multi-national clients in industries including entertainment, technology, and pharmaceuticals.

KJ: Why did you sign up to volunteer at Artesia?

ED: The images of women and children arriving at the US-Mexico border reminded me so much of images seen throughout our nation's history. The plight of this specific group is compounded when considering the danger they face just to arrive at the border - Sonia Nazario's book Enrique's Journey provides a chilling account. As an attorney and a Latino, there was a duty to make the final leg of this often treacherous journey a bit more bearable. I am fortunate to work at an office that shares this sense of duty and that encouraged my participation in the pro bono project in Artesia.

KJ: What was your toughest experience at Artesia?

ED: Having to break the news to 7 families that they would not have their bond hearings until the following week because the court did not have time to hear their cases that day. Prepping these mothers and children the day before and earlier that morning, you could feel the excitement that an end to their detention was near. To turn to these eager faces and explain that the inedible food, near freezing temperatures, and a constant state of fear that they would be uprooted and transferred without notice would continue for at least another week, was heartbreaking.

KJ: What was your most heartwarming experience at Artesia?

ED: My memory of sitting with a detainee and her son who were granted asylum as they called their family in the US and abroad to tell them the good news. At the end of the call, as I let the two know they'd be leaving today, I asked the little boy the most important question of the process: "Que quieres para cenar?" Without hesitation "PIZZA!" was the response - a child after my own heart. Instances like that make you remember the value in keeping up the fight.

KJ: Are you glad you went to Artesia?

ED: Absolutely. I think that while we are aware of the problems going on around us, it is very easy to retreat to our comfortable bubbles (especially in Orange County). Going to Artesia, served as a reminder to be thankful for the gifts and opportunities that we've been given. It is our responsibility to help other individuals discover theirs.

KJ: What have you taken away from your experience?

ED: I left Artesia with mixed emotions. While I was overwhelmed with the terrible conditions faced by detainees and the seemingly impossible task faced by the on-the-ground coordinators who juggle hundreds of cases and a revolving door of volunteer attorneys, I also left with a sense of hope. Because a real passion does exist in our legal community to help these individuals, perhaps this is a battle that can be won. The week I was in Artesia, we had a relatively small staff of 3 volunteer attorneys. Despite this small number, more than 50 bonds and one asylum claim were granted and kids, who endured a level of violence and abuse that no child ever should, would be spending Christmas outside the walls of Artesia with their families throughout the US.

KJ: How was the experience for you as someone who does not routinely appear in immigration court?

ED: Practicing business immigration, where our contact with DHS consists of mailing strongly-worded letters to a monolithic government building and waiting a written response, immigration court presented an opportunity to look into the eyes (via closed circuit television) of not only the adjudicator but of the ICE attorney. While reading a boilerplate RFE from USCIS allows me ample eye-rolling opportunity, I was not afforded this luxury as opposing counsel repeatedly made the argument that the tiny indigenous women and children we represented were part of a smuggling network and threats to national security. As the hearings went on, I began to wonder if opposing counsel actually believed the arguments they were making or if they were simply doing what they were told in order to climb from one alpha-numeric government classification to another. As my colleague, Megan Jordi noted in her piece, the feeling we gathered among many of the ICE officers was that they viewed the detaining of these women and children as an exercise in futility. After a week of hearing different ICE attorneys parrot the same arguments to the Immigration Judge who had heard them thousands of times before,  I left Artesia wondering if this sentiment had finally made its way to the Denver Immigration Court and Washington DC. Would it ever?