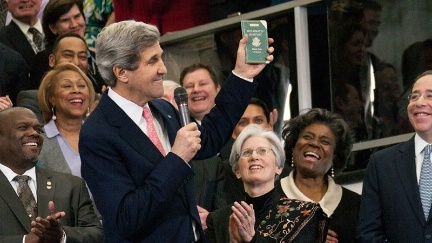 The Supreme Court has set oral argument in Kerry v. Din, which raises the issue of the scope of the doctrine of consular nonrecviewbility, for February 23.  The Court previously had set oral arguments in Mellouli v. Holder, which involves the removability of a lawful permanent resident because of a misdemeanor drug paraphernalia conviction, had previously been set for January 14.  Watch for previews of the oral arguments on SCOTUSblog.com, with links on this blog, in coming weeks.

At this time, Din and Mellouli are the only immigration cases that the Court has accepted for review in the 2014 Term.

Listed below are links to weblogs that reference Oral Arguments in Supreme Court in 2014 Term Immigration Cases: