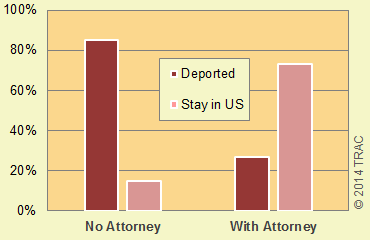 Unaccompanied children are represented by an attorney in only about one-third (32%) of 63,721 cases pending in Immigration Court as of October 31, 2014, according to the latest data from TRAC. Some 43,030 juveniles have not as yet been able to hire an attorney to assist them or to find pro bono representation. For the 21,588 children's cases filed and already decided since the surge of unaccompanied minors from Central America began three years ago, only 41 percent had representation.

Outcomes for unaccompanied children whose cases were filed and decided during the past three years were examined. The preiod from FY 2012 through FY 2014 was selected since it covers the recent surge in cases involving unaccompanied minors from Central America that began in FY 2012. With the updated data current through the end of October 2014, court records show that over twenty thousand of these cases have already been decided. Here are the results for children arriving during this latest surge:

Outcome if attorney present. In almost three out of four (73%) of the cases in which the child was represented, the court allowed the child to remain in the United States. The child was ordered removed in slightly more than one in ten (12%) of these cases. And in the remaining 15 percent the judge entered a "voluntary departure" (VD) order. (While with a VD order the child is required to leave the country, the child avoids many of the more severe legal consequences of a removal order.)

Outcome if no attorney. Where the child appeared alone without representation, only 15 percent were allowed to remain in the country. All the rest were ordered deported — 80 percent through the entry of a removal order, and 5 percent with a VD order.