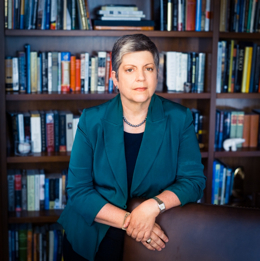 In an interview with the Washington Post, University of California President Janet Napolitano stated that she supports executive action by President Obama to reform immigration policy if Congress fails to pass comprehensive immigration reform, citing what she views as the successful 2012 program to delay deportations of younger immigrants.

In that vein, President Napolitano presented “Anatomy of a Legal Decision” on Monday, Oct. 27, as the University of Georgia School of Law’s 112th Sibley Lecturer and commented on the implementation of the Deferred Action for Childhood Arrivals (DACA) program:

"[I]n the absence of action by the House of Representatives on comprehensive immigration reform, something at least needed to be done to address the plight of the Dreamers. Our answer to that challenge – DACA—was the right thing to do, and the lawful thing to do. It was doable, and it was defensible.

In the two-plus years since DACA was launched – after what the New York Times has described as a superhuman bureaucratic effort – more than 675,000 young people, who were already in this country, have come out from the shadows. Legally, and in the light of day, they have applied for and received deferred status, work authorization, and other previously forbidden pieces of paper that had dogged their day-to-day existence.

They are people like Mario Lio, who was brought here from Peru at the age of 12. He received his education in civil engineering at UC Berkeley—Go Bears!—but given his immigration status, he was unable to pursue a professional career, let alone apply for a driver’s license or Social Security number. DACA changed all that.

"So many doors opened overnight," the 25-year-old told the Wall Street Journal. "I became a new person in some ways."

Mario Lio now works as a project engineer for the firm that built Levis Stadium, the new home of the San Francisco 49ers.

Multiply his story by nearly 700,000 and you get an understanding how much of a difference DACA has made."