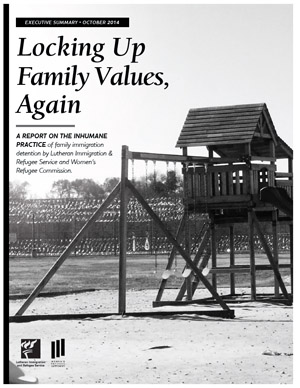 Today the Women’s Refugee Commission (WRC) and Lutheran Immigration and Refugee Service (LIRS) released a new report — Locking Up Family Values, Again — which exposes the inhumane conditions and negligence inside family detention centers incarcerating mothers and children who fled violence in Central America seeking asylum in the United States. The report is being released on the heels of several hearings this week by the Inter-American Commission on Human Rights examining immigration detention where representatives from both groups testified. The report details incidents of children’s weight loss and depression, mothers’ separation from their children and denial of even the most basic due process protections afforded asylum seekers. Mothers and children are forced to remain inside these detention facilities with no possibility of release on bond or enrollment in Immigration and Customs Enforcement’s alternative to detention programs.